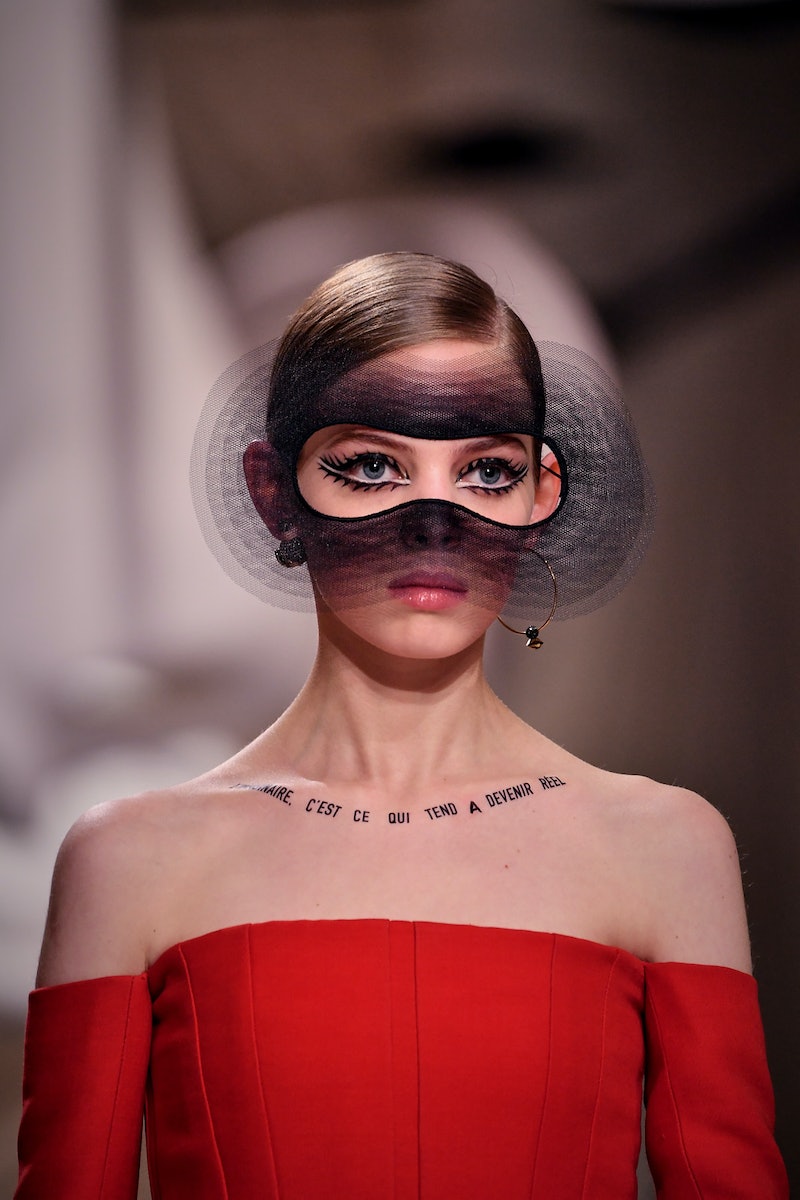 If you're tired of the same old statement necklace, you'll love the latest couture runway look. As The Cut found, Dior models wore temporary tattoos as necklaces on the Spring 2018 runway that carried phrases from the Surrealist Manifesto. These lines might look dainty on the skin, but they carry a heavier meaning than meets the eye.

Dior knows how to make a statement on the runway. Typically, the brand does it through graphic tees and statement looks, but this time it decided to pull accessories into the mix. According to Teen Vogue, models walked down the runway with writings of Surrealist movement founder André Breton tattooed across their chest. The words hung daintily around the neck to look like necklaces.

According to the publication, models wore phrases such as "In the beginning it is not a matter of understanding, but of loving" and "The imaginary is what tends to become real." There was also the phrase, ""Love is always before you. Love!" All of which was very on theme for the show titled Surreal.

The words connected perfectly to the avante-garde styled outfits that came down the runway. Each style was the perfect mix of wearable art and familiar styles to make for a surrealist-lovers dream collection. There's no doubt that the phrases also has a political undertone, like other past-Dior looks.

This wasn't the only accessory that caught peoples' eyes, either. A number of the outfits walked with artistic-looking masks that brought the look to life. Models also had exaggerated eyeliner on the eyes as they came down the runway. It was avant-garde meets Twiggy.

This is far from the first time that Dior has made a statement on the runway. In 2017, the brand sent a graphic tee down the runways that said "We should all be feminists." The charitable tee was available to purchase a few weeks later on the website, though there was backlash stating the brand was merely capitalizing on feminism. Dior also created a shirt that read, "Why have there been no great women artists," too. They pulled the words from historian Linda Nochlin’s 1971 essay, according to Vogue.

“The question ‘Why have there been no great women artists’ is simply the top tenth of an iceberg of misinterpretation and misconception,” Nochlin writes in the essay. “Beneath lies a vast dark bulk of shaky idées reçues about the nature of art and its situational concomitants, about the nature of human abilities in general and of human excellence in particular, and the role that the social order plays in all of this.”

The last phrase seen on the models was "spectrales attitudes," which is the name is the name of the essay being referenced in the other tattoos.

There's no word on whether or not Dior will be selling the temporary tattoos. The other political attire that Dior created was up for grabs on their website within weeks of the show. Bustle reached out for comment on whether or not the tattoos will be available for purchase.

This wouldn't be the first time the brand created temporary tattoos for sale. Dior released 24-carat gold temporary tattoos back in 2012. According to Harper's Bizaar, they were $120 for a set, which might be why you've never heard of them before. It wasn't exactly the most affordable trend.

If the Surrealism-themed tattoos are for sale anytime soon, there's a good chance that they will be cheaper than the brand's first launch. Because, you know, they aren't made of gold. But you should probably still start saving now, just in case.

The tattoos are more than just a beauty trend, of course. The brand is raising awareness to history and how the words are still relevant today. Consider this a beauty tend and a history lesson all in one.