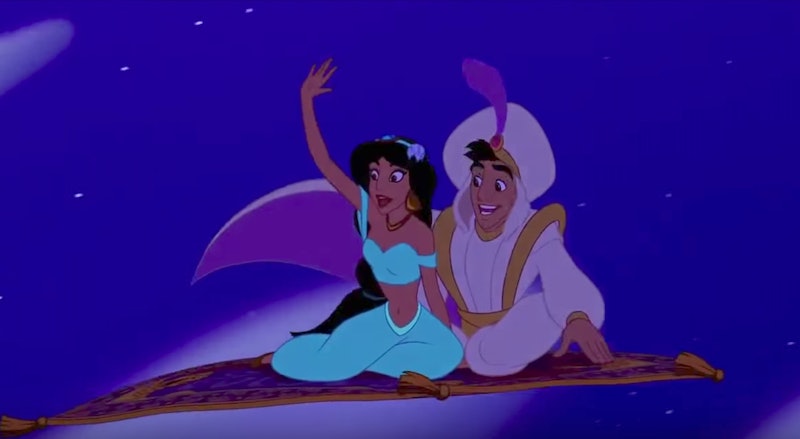 After lots of deliberation and rumors of difficulty finding the right actors, the leads of Disney's live action Aladdin remake have been cast. Announced on Saturday at the Disney D23 Expo, actors Mena Massoud and Naomi Scott will join Will Smith in director Guy Ritchie's reimagining of the Disney classic. One look at Massoud and Scott's acting credentials indicates that these actors are more than qualified for the roles, and furthermore, that they are exciting choices for the leads.

Massoud will star in the remake as Aladdin, the rogue hero at the center of this story. According to Massoud's IMDb page, he's been steadily working since 2011, appearing in TV shows like The 99 and Open Heart. In addition to his potentially star-making role in Aladdin, Massoud will also be seen in the upcoming Jack Ryan TV reboot (starring John Krasinski) later this year.

Scott, who's been cast as Jasmine, may be a bit more recognizable to audiences. She recently had a notable role in the Power Rangers reboot. There, she played the rebellious Kimberly, better known as the Pink Ranger. She also previously appeared in films and TV shows like Lemonade Mouth and The 33. With her fighting skills previously put on display in Power Rangers, it will be interesting to see if they get put to use again in Aladdin. If the remake is anything like the Disney original, then Jasmine will no doubt find herself in some tricky situations, so having her own heroic capabilities would certainly come in handy.

Until this latest casting announcement, there were reports about casting issues; namely, that the team was having trouble finding the right actors for the lead roles. The public's reaction to The Hollywood Reporter's news that the Aladdin casting team couldn't find actors who could sing, dance, and were of Middle Eastern or Indian descent was somewhat incredulous. Many people immediately posted on social media about qualified actors, including notable Bollywood actors. This was done in an attempt to highlight just how easy it was (in theory) to find stars who fit the bill.

However, any issues seem to have been resolved with the casting of Massoud and Scott. Further cross-examination between the original casting call and these actors' qualifications reveals they are absolutely right for the role. Entertainment Weekly notes that Massoud was born in Egypt, but was raised in Canada, and Scott is half-English, half-Indian, which should hopefully quell fears about not finding actors of color to fill the roles. Additionally, Scott is an accomplished singer, but Massoud? Well, you'll have to wait and see whether his singing skills are up to snuff.

It's a relief to see that Aladdin is finally on its feet with two great actors leading the way. This remake has had one heck of an interesting start (to put it mildly), but let's hope it's smooth sailing from here on out.

More like this
Anne Hathaway’s ‘The Devil Wears Prada’ Anniversary Post Turned Political
By Brad Witter
All The Sneaky Lindsay Lohan Movie Easter Eggs In Her New Ad, Explained
By Stephanie Topacio Long
The 'Hocus Pocus' Sequel Finally Has A Release Date & It Makes Total Sense
By Shannon Barbour and Radhika Menon
Everything To Know About 'My Big Fat Greek Wedding 3'
By Grace Wehniainen
Get Even More From Bustle — Sign Up For The Newsletter