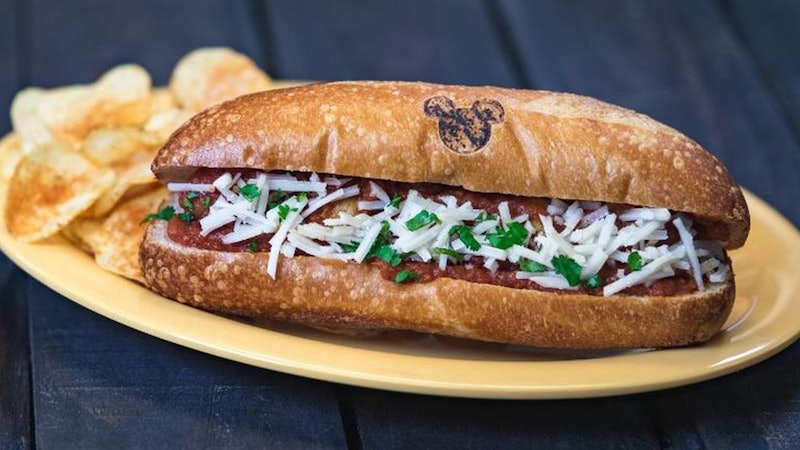 A dream is a wish your heart makes, especially if that dream is “plant-based burgers at Disney parks.” Announced Tuesday, Feb. 25, Disney is bringing Impossible Foods to its parks. Mickey and the gang are going plant-based with the rest of us. Starting on Feb. 28, guests at Walt Disney World Resort, Disneyland Resort, and Disney Cruise Line will be able to enjoy Impossible Foods at select restaurants. The new plant-based meat menu items include a Petite Impossible Burger served with guacamole and pepper jack cheese at Avocado Time Marketplace, an Impossible Cheeseburger Mac & Cheese at Nuts About Cheese Marketplace, and an Impossible Meatball Submarine at Paradise Garden Grill. If you’re looking to eat less meat, you’ll have a few more options available at Disney parks.

The partnership between Impossible and Disney will start with a launch at this year’s Disney California Adventure Food & Wine Festival. “We’re excited to add more items featuring the Impossible Burger to our menus,” said Chef John State, culinary director at Disneyland Resort. “We’re always looking for ways to bring more flavor, innovation and creativity to the Disney dining experience and we’re delighted to include Impossible Foods in new dishes that our guests and fans are sure to enjoy.” What else can they say except, “you’re welcome.”

In a blog post on Sept. 24, 2019, Disney announced hundreds of new plant-based foods would soon be coming to their parks. In addition to the recently announced menu items from Impossible, guests can already find plant-based food all across their parks. There’s the Chili-Spiced Crispy Fried Tofu Bowl from Satu’li Canteen at Disney’s Animal Kingdom. There’s a Felucian Garden Spread from Docking Bay 7 Food & Cargo at Star Wars: Galaxy’s Edge, which comes with a spread of plant-based “kefta,” hummus, veggies, and pita. There’s even a plant-based Cashew Cheesecake from California Grill at Disney’s Contemporary Resort. So, you can have your cake and stay plant-based, too.

“We are thrilled to be working with Disney,” said Dennis Woodside, President of Impossible Foods. “The millions of park-goers who visit Disney Parks and Resorts and sail on Disney Cruise Line each year – including those who are reducing their impact on the environment by eating less meat – will now be able to order the Impossible Burger and other delicious dishes made with our plant-based meat. We look forward to the exciting opportunities ahead with this new relationship.”

Plant-based meats are having more than just a moment. Back in 2014, Chipotle’s vegan sofritas option was a rarity in fast food. In the past six years, we’ve seen a boom in vegan “meat” options everywhere from the grocery store to the drive-thru. In April 2019, Burger King launched the Impossible Whopper. In Aug. 2019, Kentucky Fried Chicken partnered with Beyond Meat to make plant-based KFC products. Now, Disney is joining the ranks of major brands to release plant-based menu options.

If you're looking to jump of the plant-based bandwagon, you won't be lack for options. If you find yourself at Disney, you'll want to check out their new Impossible burger options. Also, pro-tip: Dole Whips are vegan.