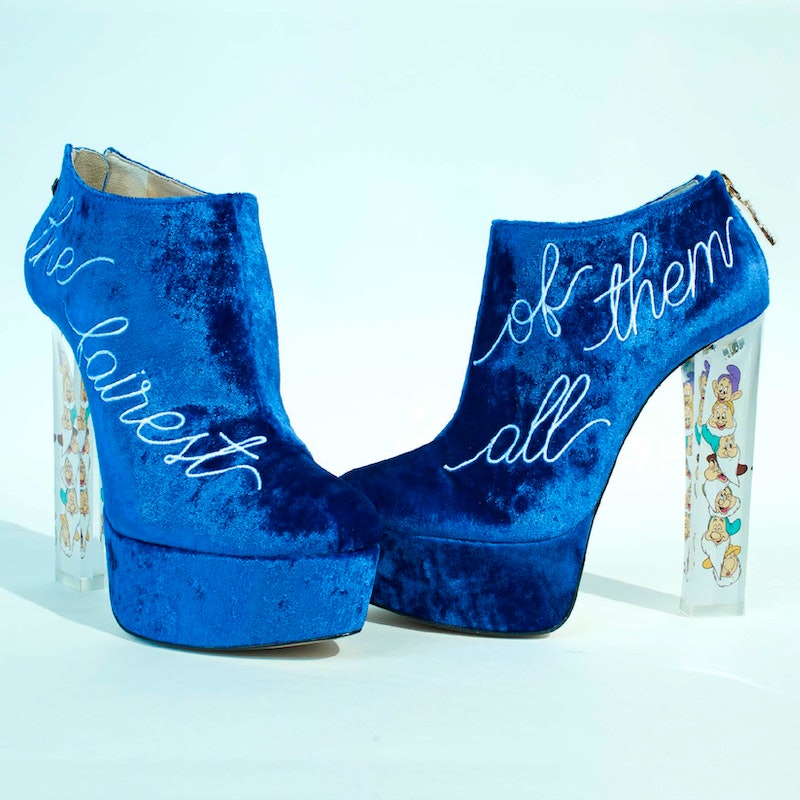 Some people may have lost their love for Disney, and you know, that's great for them. However, it's probably safe to say that most still have a special place in their hearts for Disney and it's classic princess tales. Now, Ruthie Davis x Disney princess shoes are here to help you showcase that you're not over your addiction to the classic film company – and you're certainly not ashamed of it.

Disney princess inspired fashion and beauty has been given a grown-up spin as millennial nostalgia has seemed to hit a peak. From Lip Smacker Mickey & Minnie packaging, princess-inspired lingerie, and Torrid's fandom collections, brand definitely know that Disney mania is alive and well. Now, there's an upscale shoe choice for you to express your princess love.

Luxury shoe designer Ruthie Mae teamed up with Disney to designed princess-inspired heels, and they balance the fine line between wearable heel and gorgeous homage to the films. The shoes focus on Disney's very first animated film, Snow White & the Seven Dwarfs. From Snow White herself to the Evil Queen to the diamond mine in which the dwarves work, the shoes take inspiration from multiple parts of the film, and they translate beautifully to the shoes.

While each pair of heels is gorgeous, there is a bit of a caveat to snagging them and making them your own. They've got quite the price tag. The most affordable pair retails for $498 with the priciest reaching $798. If, however, you want to splurge, or you've got a very generous family member, partner, or friend, the heels are available for pre-order on the Ruthie Davis website.

Davis isn't the first shoe designer to launch footwear with Disney inspiration, though. Vans offered up an affordable and casual footwear option back in 2015. Then, there were the absolutely Kira Kira worthy Minnie Mouse heels by Oscar Tiye earlier this year.

If you don't have the cash to snag these Ruthie Davis heels, don't fret too much. There's still tons of affordable Disney merch that you can shop to express your love for your favorite princess.

Here's some more affordable Disney merch varieties to shop while you mop up the drool from salivating over the Ruthie Davis Collection.

While maybe not quite as glam, these Minnie Mouse Keds are not just adorable but affordable.

They may not be heels, but these slippers are cozy and comfy. What's not to love about that?

These studs are adorable. While they're slightly pricy for studs, they won't totally break the bank,

Cozy and Disney themed is the best combination.

How great is this take on the classic Disney princesses? And it's affordable on top of that.

If you love Disney, glam, and heels, the Ruthie Davis Snow White heels are perfect. And if you're willing to majorly splurge, they can totally be yours. Just maybe don't buy more than one pair...