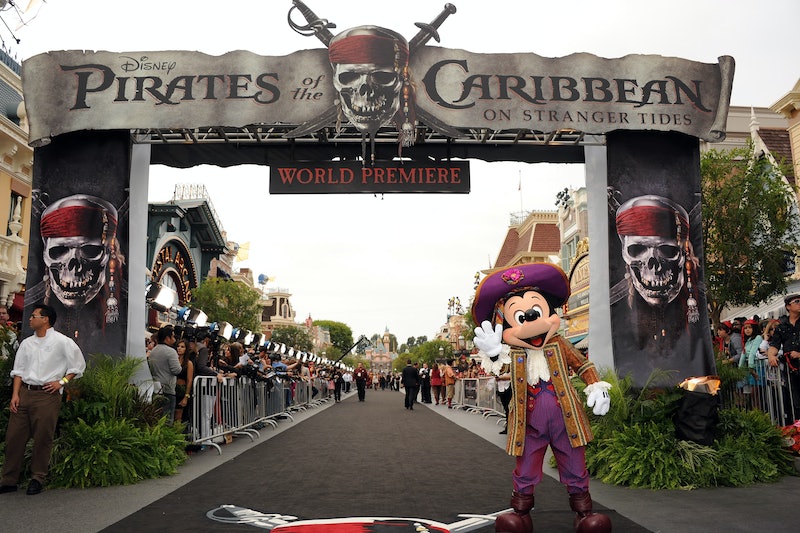 After being closed for six weeks due to refurbishment, Disney’s Pirates of the Caribbean ride is reopening with a few key updates. Starting Friday, June 8, the new and improved ‘Pirates’ ride will no longer feature the “bride auction” scene. (Ah, 2018. A time when the casual reenactment of human auctioning was still occurring at the happiest place on earth! Cute!)

Last year, Disney announced they’d be making the much-needed update to the ride, which was first introduced to the park in 1967. Rather than animatronic pirates auctioning off animatronic brides, guests will see said animatronic pirates auctioning off stolen loot. The sign which previously read “Auction: Take a wench for a bride” will also be changed to reflect the new scene. So, the plundering and pillaging characteristic of the ‘Pirates’ ride will still be in full fledged robotic action, just with slightly less sexism.

However, not everyone is happy with the change. As reported by The Mercury News, unofficial Disneyland historian and author David Koenig said “this one really irks me — but does not surprise me.” Koenig also added, “The bride auction is being removed because Disney is lily-livered. No one is really offended by animatronic pirates acting lusty. It’s in-character silliness. I don’t advocate gunplay, thievery, alcoholism or sexism, but I’m still able to enjoy a show in which pirates behave like pirates.”

At Disney’s D23 Expo in 2017, some fans were equally displeased by the announcement. According to the LA Times, some in the crowd began chanting “We wants the redhead,” echoing the phrase the robot pirates yelled during the bride auction on the ride.

(Ah, 2018. A time when people still care more about the historical integrity of a robot amusement park ride than how it reflects on actual human people. Cute!!!)

The “redhead” being catcalled on the ride will not be disappearing entirely. Instead, she will be reimagined as Redd, a powerful pirate leading the auction rather than acting as the prize. Disney also notes that Redd will be one of the characters roaming the park. Guests will be able to meet the “fierce and independent pirate” human face to face and take pictures. Three cheers for pirate equality, I guess?

This is not the first update to the Pirates of the Caribbean ride. As USA Today points out, similar updates were made to the ride more than twenty years ago. Prior to 1997, one of the scenes on the ride depicted seemingly drunken male pirates chases women around in a circle. (The scene was problematic at best.) The 1997 update to the ride changed the narrative slightly: the male pirates are still chasing women ... but now appear to be after the alcohol the women are holding. (Baby steps, my friends.)

Is the update to the ride small? Sure. However, it is significant when we talk about casual misogyny that still permeates our culture. Studies have shown that even things as seemingly innocuous as sexist jokes do normalize sexism in our society. (A scientific fact that likely seems obvious to anyone who experiences sexism, racism, or other forms of discrimination or bigoted microaggressions first hand.) While getting rid of an animatronic bridal auction and creating a female pirate are perhaps the smallest of steps, they are still steps. Hopefully, these steps will lead us toward better representation in all forms of media (not just robot rides) as well as equality in our overall culture.

Additionally, much to the disappointment of many Disney fans, the updated ride will not include a reopening of the Fastpass lane. Though one was introduced in 1999, the separate line was removed from the ride in 2006. You’ll just have to keep waiting in the typically long line to see the updated ride.