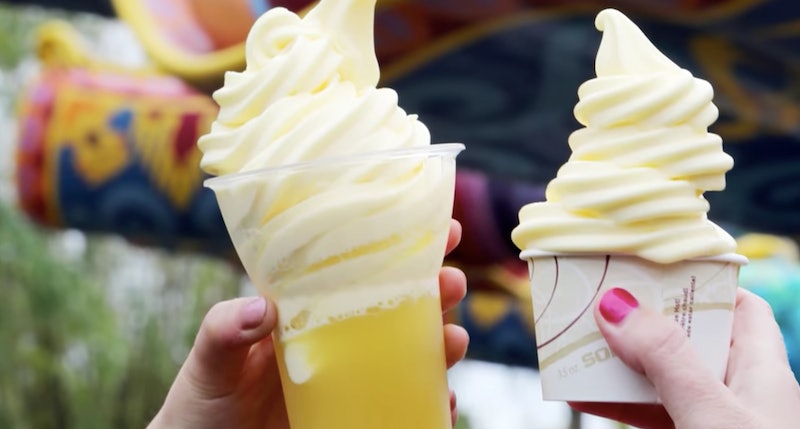 There are many reasons to go to Disneyland: the endless charm of our favorite movies and stories from our childhood, the promise of sunnier and warmer weather, the excitement of the rides, the wonderful feeling that you're like a little kid again. Oh, and don't forget about the food. Sure, Disney parks are known for the elaborate rides and set-ups, as well as the array of characters brought to life, but they are also really, really good at food. One of their best treats definitely has to be the pineapple Dole Whip, which you've undoubtedly heard of, even if you haven't tried it yourself. And get ready, because Disney's pineapple Dole Whip is now available in doughnut form, PEOPLE reports. No, this is not a drill!

For those who aren't already a part of the cult following that surrounds the Dole Whip, allow me to explain. This frozen treat is a dairy-free, pineapple-flavored soft serve dessert that is sweet, smooth, and hits the spot after a day of hopping from spot to spot. Like any other product with a cult following, this treat isn't exactly super accessible (if it were, it probably wouldn't be the same, you know?). You can only buy a pineapple Dole Whip in the Enchanted Tiki Room in Disneyland, or Aloha Isle in Adventureland in Walt Disney World. Typically, you've always been able to get this Dole Whip in one of two forms: the standard soft serve dish, or as a float. The float — which is the Dole Whip with a shot of rum — is really only available at Disney's Polynesian Resort, but don't you really want one now?

This treat is a pineapple-flavored doughnut with toasted meringue on top, and has been dubbed the Dole Whip Doughnut, although according to a Disney representative who spoke with PEOPLE, this isn't actually the official name for the dessert — but I think we can all agree that it should be. So, sure, this isn't actually a pineapple Dole Whip doughnut, but it basically is.

Now for the bad news: this is a limited edition doughnut, so if you want to try it out, you need to get to Disneyland ASAP. According to PEOPLE, the pineapple Dole Whip doughnut is just one of three doughnut they make each day. Disney told PEOPLE, "There is a limited amount of donuts [sic] made so when we sell out for the day, we sell out." Plus, it's only available until Friday, April 20. That's too soon! We need more time! Just look at this thing:

It is truly a beautiful work of art. I never knew I needed toasted meringue on a doughnut until right at this very moment. It looks so... perfect. Wonderful. Like the best treat ever.

If you weren't already planning an upcoming trip to Disneyland, I'm guessing you're about to now. And if you can't do that, what do you think the odds are of convincing Disneyland to add this to their regular doughnut rotation? It shouldn't be too hard, right? I just feel like this is the perfect summer treat! It's not fair to those of us who can't get there in time. If you're one of the lucky ones who gets to try a doughnut, eat one for me too, please. Enjoy!