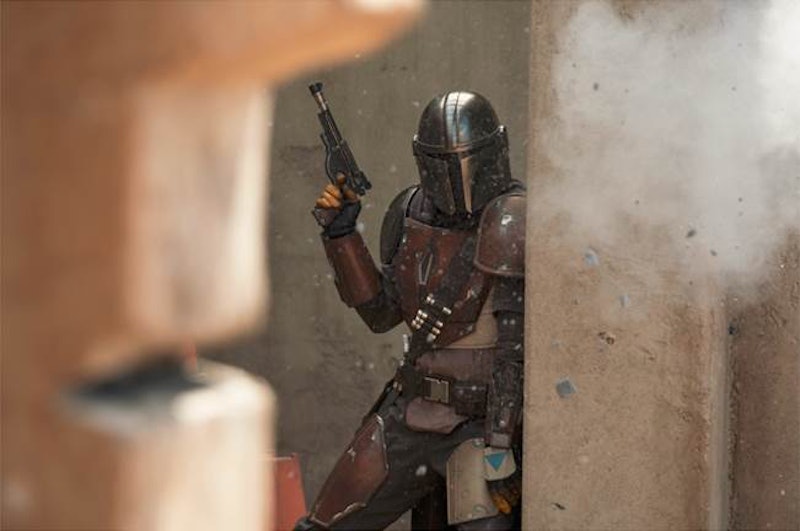 If you thought a major teaser trailer for the new Star Wars: The Rise of Skywalker was the last big drop from the Star Wars Celebration, then you underestimated Disney. Because on Sunday, Apr. 14, fans at the Chicago event got their first look at Disney+'s Star Wars series The Mandalorian — including photos from the upcoming series. The new images make it clear that if you're a fan of the galaxy far, far away, then you're going to want to get a Disney+ account as soon as it's available.

Not only did attendees get a look at character photos for the Star Wars series, they were also treated to a teaser for the show (sadly, it hasn't made its way online just yet). Per a press release from Disney, the series' executive producers Jon Favreau, Dave Filoni, and Kathleen Kennedy were joined on a panel for the show by stars including Pedro Pascal, who plays the titular Mandalorian, Gina Carano, and Carl Weathers. In addition to releasing the first photos from the series, it was also confirmed that The Mandalorian will premiere on Disney+ when it drops on Nov. 12 — which means subscribers won't have to wait to see what a Star Wars TV series looks like.

It was already announced back in December that Pascal, a Game of Thrones alum, would be taking the lead role as The Mandalorian. For a bit of background to that possibly-familiar name, the title refers to the people of Mandalore, a planet that produces mercenaries and bounty hunters and where the well-known characters of Boba and Jango Fett come from. The suit he's wearing in the picture is special to their planet, which is why it looks like the ones that the Fetts wore.

The Star Wars site describes the character as a "lone Mandalorian gunfighter in the outer reaches of the galaxy." It doesn't give away much, but it's all still super intriguing. Plus, the yet-to-be-released footage shown at the Star Wars Celebration made the crowd super happy, if clips of their reactions are anything to go by.

Additionally, fans know that Carano will play a character called Kara Dune, and Weathers will play someone named Greef (their characters are the last two images from Disney+). Details about those roles remain scarce at the moment, but according to Deadline, the series will take place "after the fall of the Empire and before the emergence of the First Order," so that's between Episode VI: Return of The Jedi and VII: The Force Awakens, to put it in perspective. Rogue One was in a similar position, falling between trilogies (in that case it was between the prequels and the original trilogy).

A few other cast members have been announced as well, including Nick Nolte (Hulk) and Giancarlo Esposito (Once Upon a Time). Thor: Ragnarok's director Taika Waititi will also voice IG-88, which is a huge tie-in to Empire Strikes Back, which was the last time the droid was seen in the movies. The droid was briefly onscreen in Episode V and is an assassin droid, possibly one that will work with The Mandalorian. Definitely not a droid you'd like to be looking for.

Additionally, Waititi will also be a director of an episode or two, along with other notable names like Deborah Chow (Jessica Jones), Rick Famuyiwa (Dope), and Bryce Dallas Howard (Solemates), according to the official Star Wars site. There's a good amount of info, but yet so much left to discover about The Mandalorian, and hopefully the footage is released soon to really satisfy Fett fans everywhere. Boba and Jango Fett might not be in the series, but it seems like it will certainly pay tribute to them and their Mandalorian roots.