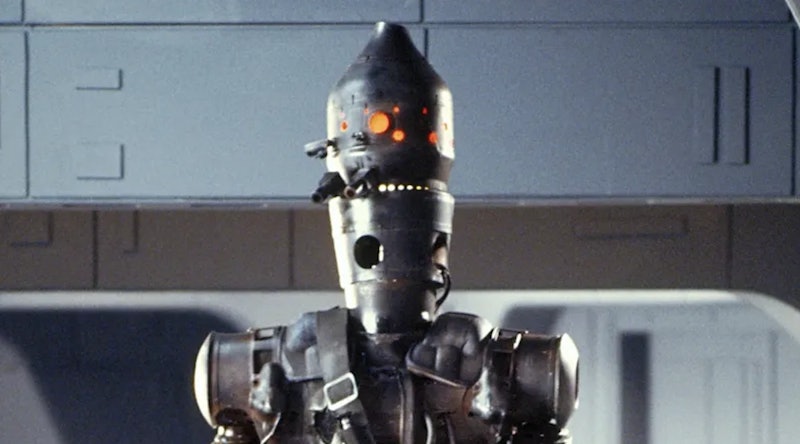 This might be the droid Star Wars fans were looking for and it came just in time for Christmas. Director Jon Favreau revealed a new character from The Mandalorian that has an interesting Fett family connection. His announcement also finally confirmed that the titular bounty hunter, played by Pedro Pascal, has at least one thing in common with the ones that came before it.

In a Christmas day Instagram post, The Mandalorian writer and executive producer Favreau shared a photo of a Tin Man-like droid in front of a green screen. "Merry Christmas!" he wrote and nothing else. Of course, no explanation was necessary for serious Star Wars fans who knew that this droid wasn't exactly new. Instead, this new Mandalorian character looks a lot like IG-88, "a robotic bounty hunter who first appeared in The Empire Strikes Back," according to Collider.

While this particular droid, an assassin by trade, isn't a household name it has earned cult status with limited screen time, which might sound familiar to all those Jango and Boba Fett fans out there. Collider even went as far to say that IG-88 has earned "a Fett-like cult following" with its one Empire scene in which he joins Darth Vader's squad to help locate the Millennium Falcon. And who else is there looking to pick up Darth's bounty? Well, Boba himself, along with Dengar and Bossk, who is also rumored to have a role in this new series.

It's not all that surprising that The Mandalorian has a Fett connection. In an earlier Instagram post, Favreau revealed that the series will be set in the years following Return Of The Jedi, "after the fall of the Empire and before the emergence of the First Order." In that same post, he also revealed that The Mandalorian would take place "after the stories of Jango and Boba Fett."

While the Fetts might not appear in the series, which is slated to debut next year on Disney's upcoming streaming service Disney+, this tidbit established a connection that wasn't all that surprising being that the Fetts are both from a Mandalorian planet. See, the new show's title is a reference to a popular segment of the Star Wars universe that hasn't yet been covered in the films.

According to the Star Wars Wiki, the Mandalorians "were a predominantly human ethnolinguistic cultural group who originated on the planet Mandalore. Mandalorians had a particularly unique role in galactic history as legendary warriors against the Jedi." And now it will be interesting to see what IG-88 might have to do with this particular Mandalorian, a lone gunfighter who might not be so alone anymore.

Already, the fan site Making Star Wars reported that IG-88, should it be IG-88, was spotted firing blasters blasters and "riding speeder bikes and attacking enemies." No details on who these enemies are, no surprise.

More like this
'Stranger Things' Fans Are Begging For Steve To Live For The Funniest Reasons
By Grace Wehniainen
'Stranger Things' Season 4 Volume 2 Trailer Teases New Episodes Coming July 1
By Grace Wehniainen and Gabrielle Bondi
The 'Ms. Marvel' Review Bombing Controversy, Explained
By Radhika Menon
Who Is Liam Neeson's Character In The Obi-Wan Kenobi Finale?
By Kadin Burnett
Get Even More From Bustle — Sign Up For The Newsletter