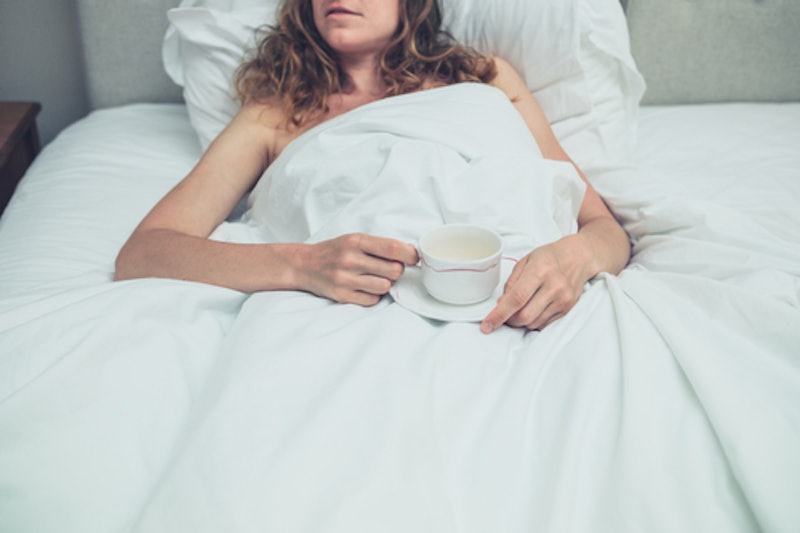 If you frequently go through nights of disrupted or fragmented sleep, it may spell bad news for your heart. That's the revelation from a new study published in Nature this week, and it seems that the cardiovascular problems caused by poor sleep have an interesting source: your white blood cells. While they're best known for being a fundamental part of your immune system, the new study with mice shows that white blood cells might also play a big role in heart issues in people with disrupted sleep.

The researchers who conducted the study found that mice with persistent disrupted sleep — in other words, mice that didn't just sleep badly on one night but had disturbed sleep constantly, over at least 12 days — were more likely to develop a condition called atherosclerosis. Atherosclerosis is the technical name for the build-up of plaque inside your arteries, narrowing their pathways and foreshadowing issues like heart attacks.

When the scientists checked out the mechanism behind this link, they found that the key appeared to be something called hypocretin. Hypocretin is a neural stimulant naturally produced in the body; it regulates how awake and hungry we feel, and moderates our arousal system, or alertness. People with narcolepsy who fall asleep regularly and without warning have very low levels of hypocretin, and too much of it in your system induces insomnia.

In mice who had regularly disrupted sleep, hypocretin levels plummeted. That, it seems, is where heart issues came in — because hypocretin doesn't just keep us awake. It also interacts with cells in our bone marrow, and in mice where hypocretin levels were very low, the bone marrow cells reacted by producing higher levels of a protein that boosts white blood cell production. And that, in turn, caused plaque build-up in the arteries.

It's a complicated series of events, like a collection of dominos falling: first sleep gets disturbed regularly, then hypocretin levels go down, then bone marrow cells over-react and cause a peaking white blood cell count, which then creates atherosclerosis. But how does this unfortunate set of circumstances lead to heart disease?

An editorial in Nature raises the possibility that this insight might actually prove to be a warning against various insomnia-busting drugs. "The drug suvorexant, a blocker of hypocretin receptors, was approved in 2014 for the treatment of insomnia. The present study raises the question of whether such therapies could have harmful cardiovascular consequences," the editorial noted. However, they added that what the scientists saw in mice isn't always replicated in humans, and that suvorexant doesn't appear to raise white blood cell levels in humans.

Experiencing regularly disrupted sleep isn't just bad for your health in general; it specifically causes damage to your arteries and heart health. To combat it, try to practice good sleep hygiene, and block out things that wake you up in the night with ear plugs and an eye mask.