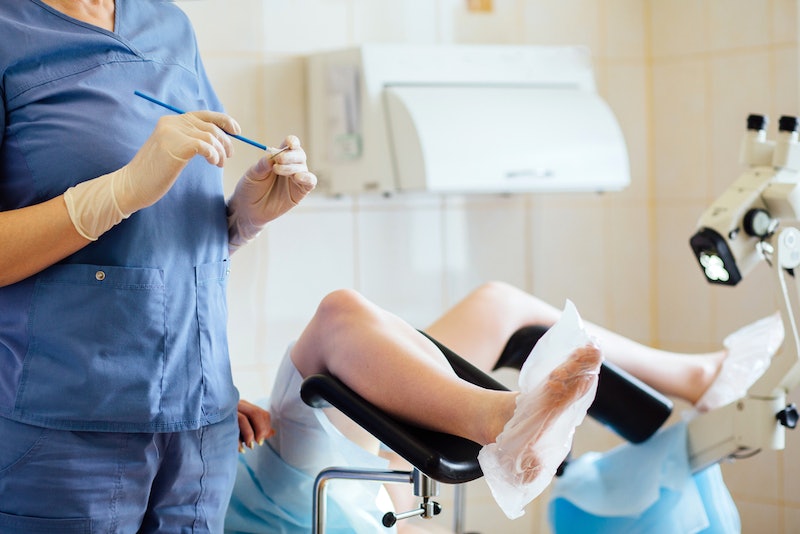 Next year, I will turn 25. While some may mark this as the milestone into true adulthood, I can't help but think of one thing: the dreaded smear test. Turns out this fear isn't unique to me. Due to people's cervical screening worries, NHS England is set to trial DIY smear tests later this year.

A third of young women have delayed making a smear test appointment because of embarrassment, states Jo's Cervical Cancer Trust. In fact, cervical screenings have fallen to a 21-year low with just over 60 percent of 25- to 29-year-olds attending a screening in 2017, reports the Guardian. The NHS wants to increase this figure to at least 80 percent and is looking to find ways to stop people ignoring smear test invitations.

Trials of this new method will take place from September, reports the BBC. Up to 22,000 people in north and east London (the place with the lowest screening uptake) will be offered the chance to carry out their own cervical screening at home. The DIY kit — which was developed by King's College London and University College London Hospitals Cancer Collaborative — will contain a vaginal swab and an envelope with instructions on how to seal and send off for lab testing.

Those considered eligible for the scheme will be people between the ages of 25 and 64 who are at least six months overdue an appointment. Currently, the NHS recommends having a smear test every three years for 25- to 49-year-olds and every five years for those aged 50 to 64.

During a traditional smear test, a nurse will swab the cervix and send off the cells to a lab to check for any abnormalities. There are also tests to check for signs of the human papilloma virus (HPV). This virus is the cause of 99 percent of cervical cancer cases, states the NHS, and is what September's DIY scheme will test for. (At-home HPV tests are currently available to buy at some online pharmacies such as Superdrug, but can be costly.)

Yet it's not just embarrassment and fear of discomfort stopping people from attending cervical screenings. As the Independent reports, some people have struggled to even get an appointment — whether down to a lack of medical staff, the absence of appointments that suit regular working hours, or difficulty in timing the test around their period, as recommended.

Professor Sir Mike Richards recently alluded to this problem, telling the Public Accounts Committee: "We need to improve the convenience for patients — better access in terms of out-of-hours services, better access in terms of [clinics] close to where people work — but on top of that, we may get to a different segment of the population by offering HPV self-sampling sets through the post."

In a statement, the chief executive of Jo's Cervical Cancer Trust, Robert Music, called the at-home initiative a "game-changer", adding: "Introduction of self-sampling will be of enormous benefit to many people, including survivors of sexual violence and [people] with a physical disability."

It's hoped that the scheme will also reduce cervical cancer cases. According to Cancer Research UK, more than 3,000 new cases of the disease are recorded each year with 854 deaths occurring annually. However, 99.8 percent of cases are considered to be preventable.

A similar strategy has already been successful in other countries including Australia and the Netherlands, reports the Evening Standard. If the pilot trial goes well, DIY smear tests will be made available nationally.

I don't know about you but this news has certainly calmed my nerves.