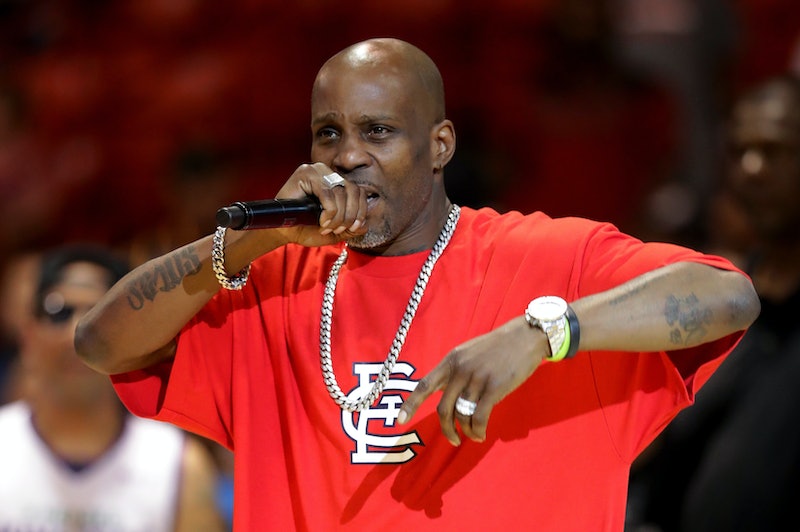 Sure, it's the catchiest Yuletide hit since "Feliz Navidad," but no, DMX's "Rudolph the Red-Nosed Reindeer" cover, called "Rudolph The Rednose Reindeer," isn't the overnight sensation it might seem like at first listen. According to FACT Magazine, the rapper first dropped the track during a 2012 radio interview "that quickly went viral." But now the 46-year-old has finally released the song as an official track, which came out as part of Spotify's Holiday edition of their Spotify Singles.

The artist also known as Earl Simmons is in prestigious company. Among other big names on the playlist doing these holiday covers, we have Kelly Clarkson releasing "Christmas Eve," a track including her usual soulful flourishes; Demi Lovato covering Bing Crosby's "I'll Be Home for Christmas"; and Miley Cyrus covering "Rockin' Around The Christmas Tree" and "Sleigh Ride." Basically, this Spotify Singles playlist is all you'll be listening to through December.

If you haven't seen the video yet, do yourself a favor and click play on the below, because it's Meghan Markle and Prince Harry-levels of happy-making. He appears to just spontaneously rap the lyrics of the famous song when prompted to by a radio host, and, even in its roughest form, it's gorgeous. He even energetically declines the offer of a print out with the lyrics on, responding "I KNOW THE LYRICS."

So, thank goodness we're finally getting an official version, complete with sugary-sweet Christmas bells in the backing. Arguably, the extra cute instrumental makes this 2017 version even stronger than the original, since the discrepancy between DMX's characteristic form of shout-rapping and the jingle bells tinkling away in the background is the most compelling part of the track. If you're not so sure about the schmaltzier end of the festive music spectrum, this could be the track that rescues Christmas. It's got all the bite of "X Gon' Give It To Ya," but it's still a song you can technically play while rustling up some egg nog with your parents or while trimming the tree with your nephews and nieces.

Hopefully, this release suggests things are on the up for the rapper, who's had a difficult 2017. According to Hip Hop Dx, during the hotly-anticipated Ruff Ryders Reunion Show in which the infamous record label reunited its most prominent stars, the artist gave a lackluster performance due to technical difficulties. Issues with his microphone and a mid-song swap meant "you could hear casual conversations throughout the Barclays despite the blaring horns of the 'Ruff Ryders’ Anthem.'" Twitter user @Kozza, who was presumably at the concert, commented that, "DMX is standing on a speaker... this crowd is stressed for his safety." At the end of August, XXL reported that DMX had headed to rehab in New England.

But that wasn't the only hard part of the rapper's year. In July 2017 Variety reported that DMX had been arrested for tax evasion to the tune of $1.7 million and that he could be facing 44 years in prison, so he's been under a lot of pressure. But things do slowly seem to be coming together for the artist, and perhaps this Christmas release is proof that the time in rehab has given him more focus and energy. This is something that also seems evidenced by Variety's report that the rapper/actor will be the star of a documentary series titled In the Dog House.

Pour one out for your favorite musician this year by hitting play one more time on this modern-day Christmas classic. It's catchy, but not sickly sweet, and it provides a delightful alternative to listening to "Last Christmas" for the hundredth time this season.