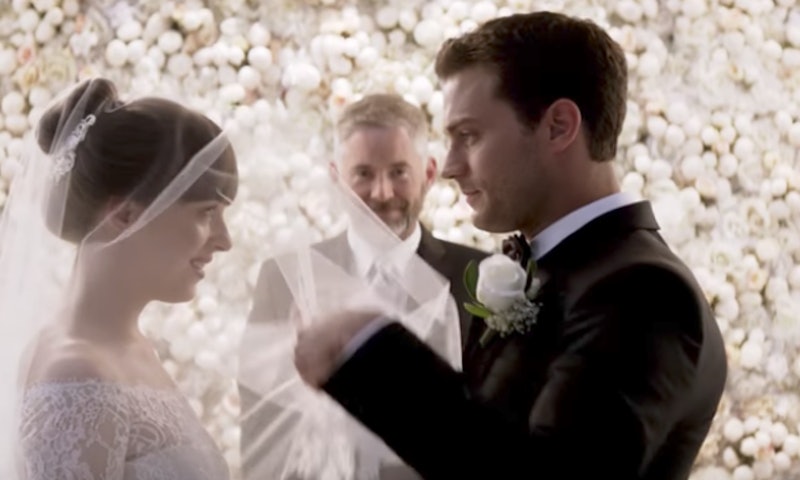 Spoilers ahead. Fandom's favorite dom/sub power couple are back just in time for Valentine's Day with the third and final installment of the Fifty Shades film series. Fifty Shades Freed is a rollercoaster of secrets, betrayal, and soap opera drama, centered around Anastasia Steele and Christian Gray's stormy post-nuptial navigation of their relationship. In the film, their newfound "vanilla" lifestyle extends all the way to ending happily ever after, with 2.5 kids and a strong family bond. But how does this square with the source material? Do Ana and Christian have kids in Fifty Shades Freed the book, or is that just a happy ending tacked on by Hollywood?

Fifty Shades Freed opens with the couple returning from their extended European honeymoon and immediately fighting over whether or not Ana should take on her husband's last name, one of the many issues couples en route to marriage usually resolve before the wedding. The crux of the book, though, comes from the very question this article asks about: kids. For most couples planning on forming a permanent, legal bond between them, kids — whether or not to have them, how many, and when — are usually questions that come up more frequently than the legal nuances of a nondisclosure BDSM agreement. But again, these two have a unique relationship.

In the movie, Ana discovers she's pregnant, which sets off a common trope among on-screen men pending fatherhood: panic and fear. In Christian's case, his concern is that the baby will take priority over him in Ana's life. Setting aside the fact this will also be Christian's baby, and the creepiness of a grown man expecting, nay, demanding the same level of care and devotion as a helpless infant from a woman, Christian feels the pregnancy is a personal betrayal, something Ana did intentionally.

There's also a kidnapping plot, family health emergencies, and numerous spiteful money-tossings to destroy businesses and free dangerous men throughout the movie. Once the dust has settled and presumably everyone's lives settle into some form of 1 percent normalcy (frequent helicopter rides included), Fifty Shades Freed the novel gives a vision of the Greys' future. Sure enough, it matches the movie's, as Ana and Christian have a toddler named Teddy, with another bundle in the oven. The couple's still having kinky sex with Ana six months pregnant, which is nice to see, as often pregnant women in media are depicted as untouchable, non-sexual Pre-Mothers, instead of, you know, pregnant people.

In the end, the Greys manage to have their cake and enjoy the pleasure of withholding it, too. They're still in love, have a happy family, and continue to have frequent sex. It turns out underneath the Fifty Shades series' leather harness beat a romance-novel heart old as the genre itself. A seemingly impenetrable, flawed man can only be reached by the heroine, who sees through his machismo to the vulnerability he hides. He sweeps her off her feet (here, with lavish gifts and attention that crosses into overbearing abuse), she must endure his torments (literal ones involving whips, in this case), but in the end she breaks through and both are rewarded with love.

With Fifty Shades Freed, the reward goes far beyond a fairytale relationship and includes an entire family. Despite the occasionally clunky writing, this fantasy and wish fulfillment of, well, normalcy (with just a hint of naughtiness) is the main reason the Fifty Shades franchise appealed to so many. Though this is the end of both series, its fans can keep dreaming.