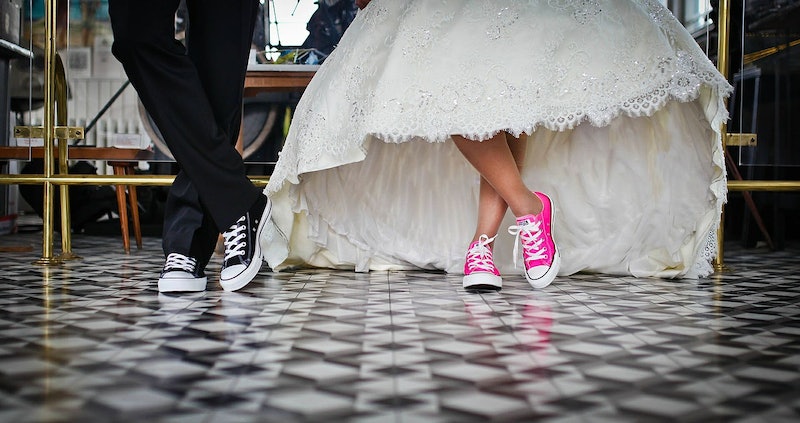 It's a whole thing when you get married. Do you keep your last name, take your partner's last name, hyphenate the two? Or do you combine both to become one of those couples who make up their own last names? There’s also the option of adopting an entirely new last name altogether, either from out of the blue or after an ancestor or other person of personal importance.

It’s certainly not as common as the more conventional solutions of combining names or taking on a new name at marriage, but inventing last names is definitely a thing. And it’s totally legal, though it can cause paper trail hassles until everything is all straightened out. Between ironing out a guest list, mailing save-the-dates, and choosing flowers and centerpieces, ruminating over how to address an impending name change — or lack thereof — is part of any marriage.

For some, it's a complete non-issue. Lots of couples happily keep their own names, and lots of women take their husband's name (or vice versa). But for most, the question of how to handle last names is at least a discussion, if not a long and thoughtful consideration. Ultimately, it's a personal decision. Here are 10 duos who merged their last names and invented something new together.

Cora Stubbs-Dame and Suriya Jeyapalan wanted to combine their names, but weren’t sure of the best way to go. Enter Facebook, where Cora posted a query. To her friends, she asked, “I challenge you to come up with good combinations,” she told the New York Times. The best of the lot, Jeyadame, is their legal last name, as well as the name of their daughter. In an interesting twist, Jeyapalan kept her last name legally, but uses Jeyadame socially.

As Glamour reports, a fellow named Geoff Werner-Allen married a woman named Suzanna Chapman. From the three last names to choose from, they created something new, with a nod to both: Challen. Let’s just be thankful for their sake that they didn’t go with Werner-Allen-Chapman.

Chris Hodges and Jamie Chase went a completely different route (pun intended). They went on a cross-country road trip before their wedding in a Ford, and then legally changed their names — to Ford. In homage to their chariot (among other factors), they took on the family name of Henry himself. No word on whether they consummated their marriage in the backseat.

As Sarah Greesonbach writes on her website, the Everywoman, she and her husband combined their last names to create a new one. She was a Greeson, and he was a Marbach. But the simple hyphenation seemed too easy, and could cause problems for their progeny. As she writes: “I could have been a Marbach-Greeson, but what a mouthful for our future children, and then what if they chose to hyphenate? A future Marbach-Greeson-Smith in the works? Not for me.” So Greesonbach it is. Still a mouthful, but less so.

Alice Kirby and Larry Charny didn’t want to take each other’s names. So they went with something completely different. They are now Alice and Larry Dark. As Larry told ABC News, “We think about language and words and we kind of free associated … Charny means black or dark in Russian, and at the time there were no others in the phone book.” Well, that’s one way to settle things.

Born Darcie Shapiro and Jeff Klein, the pair went with a real melange, using four different names to create one new one: Sharlein. As ABC News reports, Darcie’s mom’s maiden name was Behar, and Jeff’s mother’s was Rutberg. What do you get when you mix Shapiro + Klein + Sharlein + Behar? Sharlein.

When Brittany Leigh Hilgers and Michael Hess tied the knot, they decided to come up with something entirely new. As she writes on her blog, The Bowie Bride, "We narrowed the field down to either a German or a Swedish last name. Mike's family is German and Swedish mostly and mine is mostly German. So we wanted to stick to our roots." They compiled a long list of possibilities, including but not limited to Hofbräu, Whitby, Haxby, Baisley, Zinsli and Thorbjorn. They went with Höllenbräu, or "hellish brew," after coming close to choosing Hofbräu but not wanting to share the name of a popular German beer.

These two went the literal route and combined their last names straight up. Bryn Hunt and Richard Palmer now officially go as Mrs. and Mr. Huntpalmer, as they didn't love any mashups of the two names — she points to Halmer or Pant as a couple of bad options. As she writes in Rebellious Magazine, "I read about a couple with the last names Green and Smith and they just became the Greensmiths. Genius. It rolled off the tongue and sounded completely normal. Problem solved."

Trailblazers of the mashup movement, Antonio Villar and Corina Raigosa fused their names to create Villaraigosa when they married in 1987. He was later mayor of Los Angeles, from 2005 to 2013. If it's good enough for the 41st mayor of L.A., why not for everyone?

TV reporter Dawn Porter had a unique take on the whole name consolidation: She took on the “O” of her husband’s Irish surname. Her husband, an actor, kept his last name the way it was. This is a new spin on an old tradition. Instead of the woman taking the man’s last name entirely, Dawn took part of Chris’ and kept her own as well, while he kept his entirely.

More like this
31 Ways To Celebrate Valentine's Day With Your Long-Distance Love
By Natalia Lusinski and Carolyn Steber
12 Anti-Valentine’s Day Memes For People Who Are So Over Romance
By Meghan Bassett
12 Aphrodisiac Desserts To Spice Up Your Valentine’s Day
By Kaitlyn Wylde
50 Valentine’s Day Instagram Captions To Post If You’re Single
By Jessica Booth, Lexi Inks and Carolyn Steber
Get Even More From Bustle — Sign Up For The Newsletter
From hair trends to relationship advice, our daily newsletter has everything you need to sound like a person who’s on TikTok, even if you aren’t.