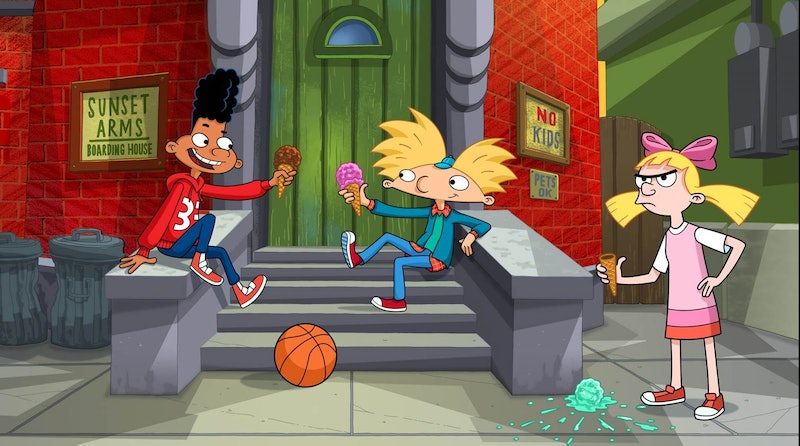 Spoilers for Hey Arnold! The Jungle Movie ahead. Building a love shrine almost entirely out of chewed gum is one of Helga Pataki’s most iconic accomplishments, but the unlikely heroine in the beloved '90s cartoon, Hey Arnold!, never got a chance to reveal her feelings toward the kindhearted title character. Now that the series is returning with a film to answer all the questions we had leftover from the series, one of the biggest is whether Arnold and Helga get together in Hey Arnold! The Jungle Movie. After all, Helga and Arnold remain — even more than a decade since we last saw them together on screen — one of the most memorable animated couples that never actually got together.

Hey Arnold! The Jungle Movie, takes Arnold and his classmates to San Lorenzo in Central America, after they win a contest that asks students to provide video evidence of their humanitarian efforts within their own neighborhood. Aware of how important this trip is for Arnold — who knows this country is where his parents disappeared — Helga secretly gives him a hand to make sure they are the chosen class. Of course, the way she gets that video made is just further proof of the obsessive nature of her love for her football head, and Arnold soon discovers that she had a hand in giving him this opportunity to find his parents.

While in San Lorenzo, Helga confesses her love for Arnold, who is overwhelmed and even alarmed even before the pair are interrupted by an attack on their boat. But, as their adventure continues and Helga truly steps up to selflessly help him the way he selflessly helps everyone, Arnold soon begins to question his own feelings toward the pink bow-wearing bully.

By the end of the film, Arnold has not only thanked Helga for everything she's done for him in San Lorenzo and beyond, but kissed her. And, in a subsequent scene in which they're back in Hillwood, Arnold (tries to) take her hand, implying that the two are now officially dating, even if Helga brushes him off in order to do her usual bully march. Arnold and Helga fans can officially rejoice... for now.

In a recent interview with Bustle, the show's creator, Craig Bartlett, explained that, even if they were to end up romantically involved, their personalities would continue to get in the way, and that’s perhaps the best outcome. “I’d like to see them together, but I’d also think that there would always be conflict, because conflict is fun,” he adds. “The thing that would make it fun would be having Helga shooting her mouth off all the time, always getting into trouble, and them having to work it out.”

However, there's probably no one that knows Helga better than Francesca Marie Smith, the woman behind Pataki’s passionate voice. While she is wary of giving exact answers about the strength of their relationship, given that fans have their own ideas of what Arnold and Helga together should be like, Smith notes that Arnold was always been a tranquil and constant rock for Helga:

Smith believes that if this young couple gets to be together, the dynamic of their interactions would change. “It would be really fascinating to see her have the opportunity to build a relationship with him in that way, where she’s really honest with him and could get his opinion.” The voice actor also wonders what would Helga do if her every breath wasn’t devoted to pursuing Arnold’s affection in a nearly pathological way. “The thing that [Helga] has been going to extremes over is Arnold. So if they were together, and she didn’t have that source of angst, I’d be really curious to see where she gets to channel all of those feelings and that passion and that energy,” she explains.

Bartlett has his own theory, “I think she would be some kind of artist, some kind of poet.” But Smith feels her character’s inner strength could point her to a very powerful position, “I thought she was going to be President,” she adds. “We’ve had a lot of different visions.”

Hey Arnold! The Jungle Movie marks a turning point in the relationship between Arnold and Helga, a turning point that fans have been hoping for since the early days. Whether the show comes back with a vengeance thanks to this movie, or whether this is the last we get to see of these young Hillwood residents, Jungle Movie provides a satisfying conclusion to the series for fans young and old.