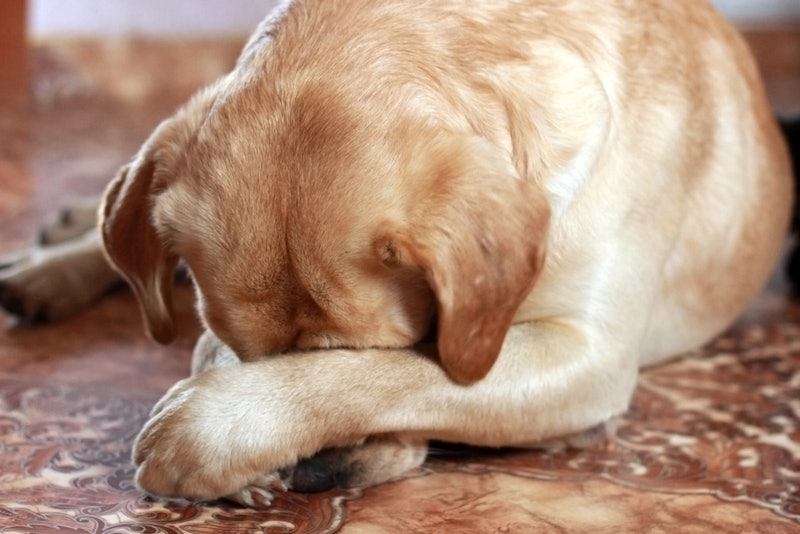 If you own a dog or just spend a lot of time with them for whatever reason, then you probably know that sometimes their emotions can feel almost human-like. They get excited when they see something or someone they love, they get grumpy or angry when they're hungry and they aren't being fed, they get sad when the people they love leave them for a long period of time, they get bored when nothing is happening, and they get sullen when they've been scolded. But does this range of emotions extend to every emotion? Do dogs feel embarrassment like people do?

Anyone who really, really knows dogs might be inclined to say yes to that, but the truth is a little more complicated. As Canidae points out, researchers and scientists know that dogs can feel emotions like sadness, anxiety, empathy, and happiness. Embarrassment, however isn't included on that list, and that's because they don't have a definitive answer about it. This is mainly because embarrassment is not the same type of emotion as the ones mentioned above — it's a self-conscious emotion, one that is not processed automatically, but more complex because it requires self-evaluation and self-reflection. Because this kind of emotion is so complicated, it's hard to study in a dog's mind, and a lot of researchers will say they simply don't know.

Still, others feel that they already know that dogs do, in fact, feel embarrassment. Pet Health Network points out that Dr. Marc Bekoff, a former professor of ecology and evolutionary biology at the University of Colorado and author of The Emotional Lives of Animals, feels that dogs do experience feelings of "embarrassment, shyness, and humiliation." Neurobiologist Dr. Frederick Range at the University of Vienna also believes that, and says his studies prove it.

Others believe that while we might not know if dogs definitely feel embarrassment, they do feel emotions that are at least similar to it. Wag Walking says, "Because we can't just ask our pets if they're embarrassed, we can only go off of subtle behavior cues to try to determine how they feel." They claim that signs of doggie embarrassment include submissive behavior, like tucking their tails, cowering, or hiding.

Still, many other researchers have come to one conclusion: we just don't know yet. Molly Sumridge, a certified dog behavior consultant and trainer and founder of Kindred Companions in Frenchtown, NJ, told Pet Health, "I don’t think we’re there yet, scientifically or behaviorally. Too often, broad assumptions are made about complex emotions, when it’s really not that simple." Sumridge added that labeling dog emotions without knowing for sure what they are can actually complicate your relationship with the dog. She warns against anthropomorphizing, which is applying human emotions to an animal because of the way we understand the world.

At the end of the day, researchers feel that while dogs may be capable of complex emotions, we simply don't know what they are yet. There is so much scientists don't know about a dog's brain, so this is something that could very well get confirmed in the near future. It's entirely possible that they just haven't figured out how to confirm embarrassment. Maybe one day we'll know for sure!