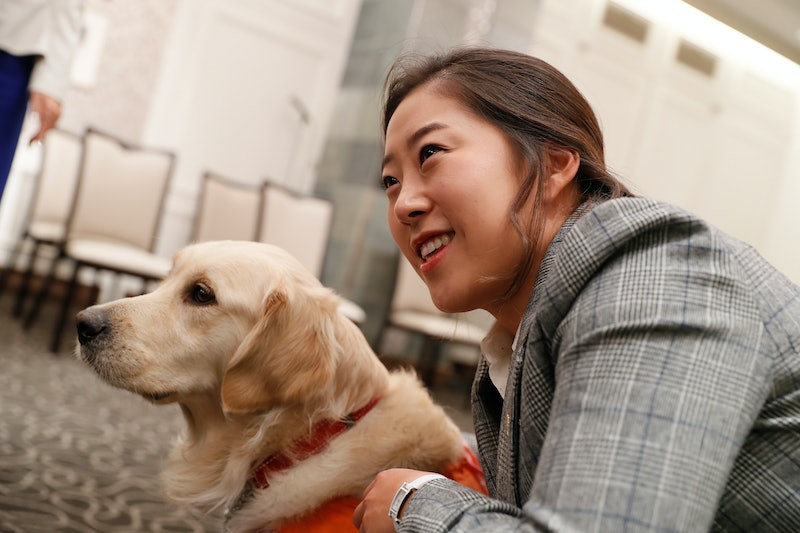 It's safe to say that the majority of us do not need more reason to love dogs. We all already know that on top of being insanely adorable and cuddly, dogs are scientifically proven to be good for our mental and physical health. As pet owners, most of us would most likely already rather hang out with our dog than go out and be social with, you know, other humans. And of course, we already know that it's much easier to have a heart-to-heart with our pups than, say, our friends. Dogs are perfect. They're basically angels. And they are also so much more like us than we thought — a new study shows us that dogs are kept awake by their worries too. (Oh, look, I'm crying.)

Having a rough night of sleep due to stress isn't the only quality dogs share with humans, though. Our fur babies pick up and mirror so much human behavior that it's actually a teensy bit scary sometimes. Every dog owner knows that pups develop their own unique personalities, and that they do human-like things, like missing someone when they're gone for too long and sensing tension when their owners are fighting,. But it goes so far beyond that! Here are a few studies that prove dogs are more like humans than you thought. They are also a great way to justify the fact that your dog is your best friend, to be honest — no judgment here!

1. They're Kept Awake At Night By Their Worries

Perhaps the cutest and also the saddest way dogs mirror human behavior is that they can't sleep when they're feeling anxious about something. A Hungarian study published by The Royal Society scientific journal showed that a dog's sleep pattern is disturbed when they're feeling stressed about something. The study looked at the sleep experiences of dogs who were exposed to either positive or negative emotional experiences. The results shows that when the dogs were part of a positive experience, they slept better. When they were anxious before dozing off, they were more likely to wake up throughout their sleep. Researchers also found that the dogs with negative experiences fell asleep faster than the other dogs, which also lines up with human behavior.

Do you ever feel like your dog just gets it whenever you're feeling really upset? Like they know you're crying about something sad and they just want to be there for you? Well, you're not blinded by puppy love. Dogs do recognize human emotions, as a study from 2016 found. And it's not just from facial cues — that's not the same as emotional recognition. Researcher Dr. Kun Guo from the University of Lincoln's School of Psychology said, "Our study shows that dogs have the ability to integrate two different sources of sensory information into a coherent perception of emotion in both humans and dogs. To do so requires a system of internal categorization of emotional states. This cognitive ability has until now only been evidenced in primates and the capacity to do this across species only seen in humans."

Speaking of emotional stuff, dogs not only pick up on ours, but they can also feel the same things. In recent research, Gregory Berns, a professor of neuroeconomics at Emory University, looked at scans of dog and human brains and found that the structure and function of the "caudate nucleus" is similar in both. The only bummer? He says this shines light on canine emotions, but still doesn't prove that dogs can actually love humans (they can, guys. Trust me).

In 2016, researchers from Hungary found that dogs can remember their owner's actions, and that they have "episodic memory" like humans. Episodic memories are memories linked to specific times and places. The results of the study showed that dogs weren't just remembering things their owners specified as important, but also things that had happened in the slightly later past. Researchers said it's still unclear as to whether or not dogs remember things with as much detail as humans do, but still — this is pretty cool.

5. Dogs Judge Humans By How They Treat Others

Have you ever heard people say they know that if their dog doesn't like someone, that means that person is bad news? Well, that may have some actual truth to it. A recent study from 2017 found that dogs (and monkeys) show a preference for people who help others. During research, dogs watched the actions of two people — one who was helpful, one who wasn't — and showed a definite preference for the ones who helped. See? Proof that dogs are moral and just creatures. Angels!

Humans often listen to music as a way to destress and calm down, and apparently, it can work with dogs too. In a 2012 study published in The Journal of Veterinary Behavior, researchers found that dogs slept the most when listening to classical music, and got nervous, with visible shaking, when listening to metal music. Researchers said, "These results are consistent with human studies, which have suggested that music can reduce agitation, promote sleep, improve mood, and lower stress and anxiety."

We all get a little jealous sometimes, and that even extends to our dogs. Researchers have found that dogs were twice as likely to try to get their owner's attention when the owner was playing with a fake dog as opposed to an inanimate object. The research also found that dogs would literally do things to get attention, like showing more affection to their owners. If you have a dog, or two dogs, or a dog and literally any other kind of animal, you definitely knew this. Now science has just confirmed it!

8. They Know How To Manipulate People To Get What They Want

If you have a dog, you already know that they definitely know how to manipulate people — my dog exhibits the definition of "puppy dog eyes" whenever she wants a treat. In 2017, scientists confirmed this when a study found that dogs can use complex methods to trick humans into giving them what they want. Researchers said, "'They're not just sticking to a strict rule, but thinking about what different options they have." In other words, they don't just try one thing — they assess the situation and go from there. Amazing!