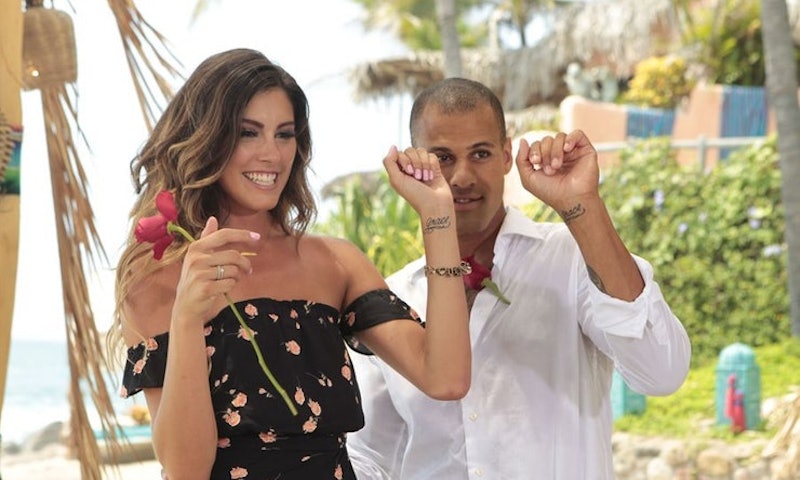 For every successful Bachelor couple, there are, oh, five or six that don’t quite stand the test of time. Unfortunately, Lace Morris and Grant Kemp are one of the Bachelor relationship casualties. Their time spent in Bachelor In Paradise together was beautiful, and they even got a shared tattoo as a marker of their love — it says “grace,” which is smart not just because it’s a combination of their names but also a word that has nothing to do with their relationship, you know, just in case. But Grace is no more, as the couple has split. So, does Lace still have her tattoo after Bachelor In Paradise?

Lace and Grant got engaged in the Season 3 finale of Bachelor In Paradise, but would you be surprised if I said it didn’t last long? Only a few months later, the duo had split. In an interview with Entertainment Tonight, the couple assured the public that everything was cool between them. “It really was mutual. We both have our issues we need to work on, and we can’t really give each other what we need at this time,” Lace said. “It’s just not the right timing. We have so much love for each other, and it’s weird because the chemistry is there, and I’m thinking, ‘Why can’t we make this work?’ But it’s just not possible right now.” Grant echoed her statements, saying, “There were things we were trying to work on that we expected to get better with time, and unfortunately it kind of went the opposite way.”

Welp, it only took a minute or so for Lace to reportedly begin hanging out with Grant’s ex-girlfriend and Grant to comment in the press. He told Us Weekly, “Recently, I’ve seen that [Lace is] doing some things to try to get my attention. She’s been hanging out with my ex Jen — the one who blew me up in the tabloids — and posting on Instagram. I don’t play those Instagram caption games. I’m an adult.” Shots fired! This went back and forth for a while, but now, Lace has finally found a new man. According to an interview with E! News, his name is Russell and the pair met on online dating app Bumble. "Immediately, we exchanged numbers and we just ended up fully talking. So, Bumble! Who would have thought?" Lace said of her relationship. Look how cute these two are.

Lace is happy and in love with a man who is not Grant (his name is Russell), but she did get a tattoo with half of Grant’s name permanently etched on her body. And it’s still there! She told TMZ in 2016 that her tattoo didn't just represent Grant — it was about the memories she keeps from shooting Bachelor In Paradise, so she'd probably keep it. But later, she told E!, "I talked to Russell about it and I think with time I think I'll definitely eventually get it covered up or edited. It’s just something we definitely don't want to sit there and look at all the time if we stay together forever, so I definitely am going to go look at getting it edited or fixed a little bit so it's not 'Grace.'" For the record, Grant has already changed his tattoo, opting for a big cover-up over the thing.

This is a good reminder that things can change so quickly, and then you either have to have very painful laser tattoo removal or get a big new piece to cover it up (or learn to live with it). Fortunately, looks like things worked out for the best in this case — for Lace at least. She is happy and healthy in her new relationship with Russell (“He's one of those guys where he literally acts like I am the only person that exists in this world,” she said), and for now, she is happy with that old tattoo on her wrist.