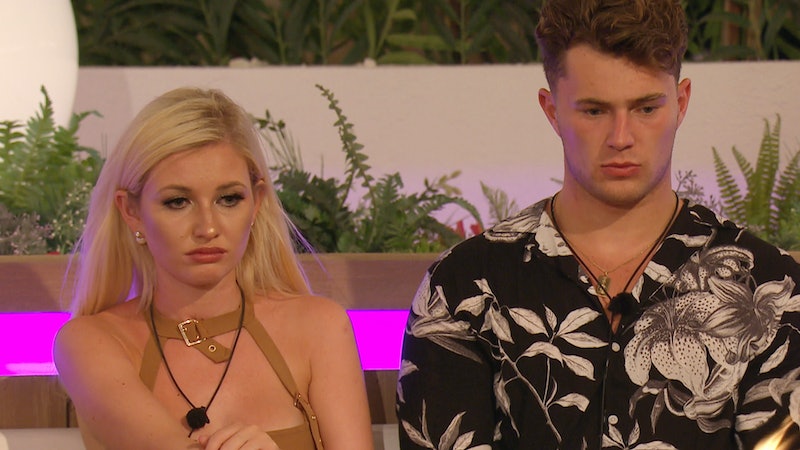 It's fair to say that the past two weeks of ITV2's Love Island have been full of drama. Viewers of the hit reality series have seen the conclusion of the infamous Casa Amor twist, welcomed a string of new islanders, and witnessed the downfall of a seemingly perfect relationship between Amy Hart and Curtis Pritchard — and following their initial break-up, it was reported that Amy had made use of the show's on-site mental health assistance. So, do Love Island contestants see a therapist while in the villa?

Well, as The Mirror reports, show bosses have previously confirmed that Love Island participants do have access to psychological support "at all times" during their time on the realty show. "We take the emotional well-being of all the Islanders extremely seriously," a Love Island spokesperson told the newspaper. "We have dedicated welfare producers and psychological support on hand at all times who monitor and regularly speak to all of the Islanders in private and off camera, especially if someone appears to be upset. All the Islanders are therefore fully supported by the professionals on site and by their friends in the villa. This means Islanders are always able to reach out and talk to someone if they feel the need. We will of course continue to monitor all of our Islanders in line with our robust protocols. Love Island holds a mirror up to relationships and all the different dynamics that go with them."

I have contacted ITV to see if they have any further comment, and will update with any new information once it becomes available.

In addition to support during the series, islanders will also be offered a brand new "duty of care process," which aims to provide "enhanced psychological support." As reported by the Independent, ITV previously announced that all Love Island contestants will now receive a minimum of eight therapy sessions after the show has ended — and the creative director of ITV Studios Entertainment Richard Cowles revealed that the show's welfare process will now consist of three stages: pre-filming, during filming, and post-filming.

In an ITV statement, Cowles said:

"Due to the success of the show our Islanders can find themselves in the public eye following their appearance. We really want to make sure they have given real consideration to this and what appearing on TV entails. Discussing all of this with us forms a big part of the casting process and, ultimately, their decision to take part."

As previously reported by Bustle, focus on the aftercare of Love Island contestants came under serious scrutiny following the tragic death of former islanders Sophie Gradon and Mike Thalassitis — and in a bid to help contestants prepare for life after the show, ITV promised to deliver "bespoke training" in areas such as "social media" and "financial management." So, it does appear that steps are being made to ensure the mental health of islanders is being put first, and I for one, am very happy to hear it.

If you have been affected by any of the issues mentioned in the piece, contact the mental health charity Mind on 0300 123 3393 or visit their website.