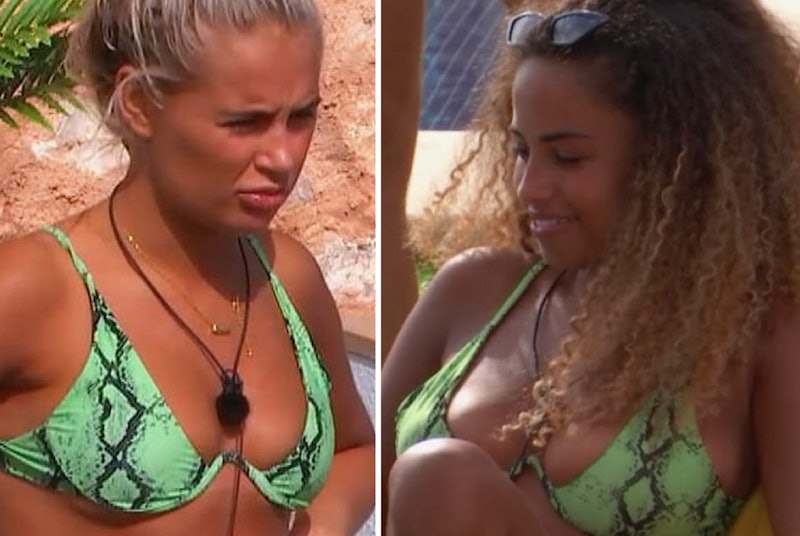 Who doesn't get bored of their wardrobe from time to time? Ugh, nothing to wear, despite having, like, 800 million items of clothing right in front of you. For most people, just nipping to the shops to buy new stuff is out of the question for financial (and environmental) reasons. However, for the crew on Love Island, it's because they are literally under a kind of luxurious house arrest until they are booted off the show. So I guess they have to share things from time to time. The question is, though, do Love Islanders share their swimwear? Because I'm not sure I'm that close with any of my pals.

Well guys, the proof is in the pudding because Amber has been filmed wearing the gorgeous mint green snakeskin bikini that Molly Mae has been vibin also. Although The Sun reports that it has not been confirmed whether the bikini is being shared or the girls came in with the same bikini.

I have reached out to a rep at Love Island to try and get some confirmation about this sharing situation, so I'll let you know if or when I hear anything back.

Now, without a tankini in sight, the women in the house have definitely favoured the more thigh-high look. And of course the thong-ish style. I don't know about you guys but even the mere sight of a thong brings yeast infection concerns, and that's before we even start thinking about how freakin' uncomfortable they are.

The bikini in question, in fairness, is super gorgeous and, at only £18, it's kind of a bargain.

And, as The Sun points out, this isn't the first time islanders have been spotted in the same swimwear. In the 2019 series, pals Rosie and Ellie appeared to be wearing the same gingham swimsuit.

But what are the implications of sharing bikinis with your mates? Well, according to The Sun, sexual health experts have sad it isn't the best idea. Natika H Halil from sexual health charity FPA told The Sun's Fabulous Digital site:

"Most sexually transmitted infections (STIs), including HIV, chlamydia, syphilis, gonorrhoea, genital warts and genital herpes, can’t be passed on through the sharing of bikini bottoms. However, certain STIs, including pubic lice and scabies, could be passed from one wearer to the next. It's recommended that you wash underwear and bikini bottoms on a hot wash before sharing with a friend."

Hello reports that, according to Love Island insiders, the villa's residents really don't have to worry about maintaining the house or, for that matter, washing their smalls:

"There are ... cleaners that come in to clean the villa, and the cast gets their laundry collected once a week and sent out to a laundry service."

Considering that the islanders have all of the housekeeping, including their laundry, done for them, here's hoping that the person at the laundrette knows to give everything an extra blast of heat.

Sharing really is caring, but maybe it isn't the best idea in this case. According to Her.ie, the islanders are given a clothes allowance ahead of entering the villa in order to make sure they are dressed to the nines at all times. On top of that, they receive free garms from I Saw It First, one of the brands that sponsors the show. Meaning that a lot of the looks you see on the show are easy to shop online.