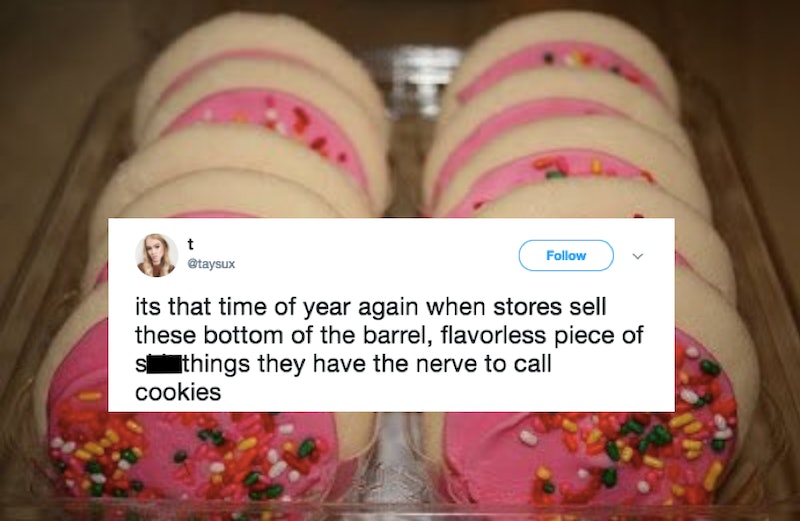 Like most humans, my favorite time of day is Petty O'Clock, aka the time of day when someone posts something that they assume is totally innocuous that then spirals into an all out civil war in their mentions. Earlier this year it was whether or not we faced the nozzle in the shower; a few years ago, of course, there was the infamous Dress that ripped the entire nation apart; and today we shine some light on a reemerging internet debate on whether the pink sugar cookies from the grocery store taste good, or are the worst thing that has ever crossed our unsuspecting lips.

The origins of this debate actually hark back to February of this year, when Twitter user @taysux tweeted an image of the offending cookies and wrote, "its that time of year again when stores sell these bottom of the barrel, flavorless piece of shit things they have the nerve to call cookies". As someone who has Very Strong Opinions about dessert, I did not bat an eye at the vitriol behind this tweet (I am personally in a one woman war against any kind of white chocolate ever produced on our planet, because uckkkk). Some 18,000 retweets later, though, and it was clear that the internet's feelings were much stronger than mine.

I think the truly heroic part of this Twitter thread is that she attacks these cookies with receipts.

Honestly, this Twitter user might have just put more effort into discrediting supermarket cookies than I did on my senior thesis (JUST KIDDING, MOM). And clearly she was not alone in her hatred for these cookies, based on the sheer amount of retweets. And to be fair, over the years, these cookies become synonymous with disappointment. This was the cookie you brought to the bake sale when you forgot about it the night before. The cookie someone put out during the break when your school was doing PSAT testing. The cookie that never seems to have a visible expiration on it anywhere, probably because even when digested, they never truly die.

Now, you will note that these tweets are from February, but for some reason the hatred/love for them is so intense that this tweet has made a resurgence and yet again plunged us into the depths of cookie debate hell. We have, of course, the firm disbelievers of this cookie.

Perhaps none of the replies, though, were quite as vehement as this one.

It seems the cookies are causing controversy wherever they go; the original thread itself is a war the likes of which scarred my pure internet eyes, but it wages onward in tiny battles of the mentions of people who dared to retweet her. One user took matters into own hands with a poll that seems to somewhat settle the score, because Twitter polls are a scientifically sound way of measuring things, right?

I guess the joke is really on all of us, though, because regardless of our opinions on these cookies, I think we can all agree that we could all of us endure nuclear fallout, a zombie apocalypse, and the earth literally crashing into the sun before these went bad. If you're among the set that hates these with a burning passion, please allow me to steer you toward this post full of sugar cookie recipes so you can fight the man and make your own. If you're on team "I'm not really sure how I feel about these because I don't like them but feel forever psychologically attached to them because I was eating one in the fourth grade when I read the scene where Cedric Diggory died in the fourth Harry Potter book," then call me, friend, because we both have a lot of feelings to work out.