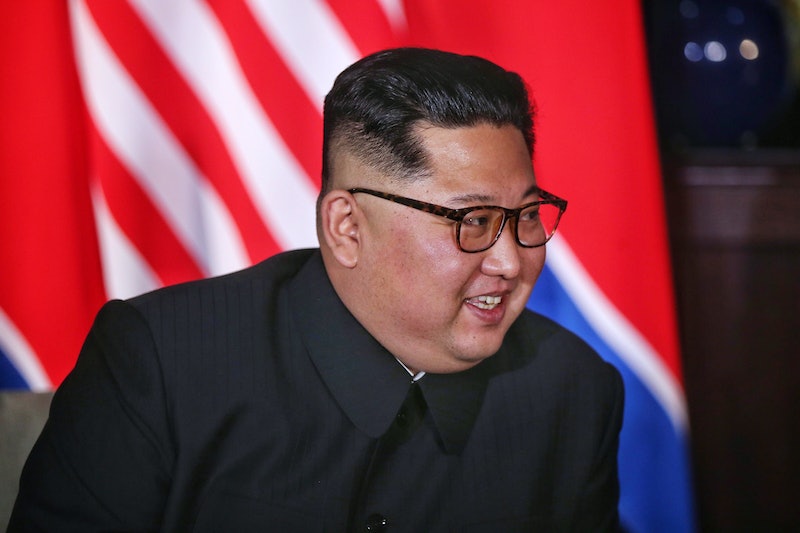 There are few people in the world who rival North Korean dictator Kim Jong Un in terms of brutality — if any. And yet, the summit he recently took part in alongside President Trump seems to have had a positive effect on his favorability ratings in the U.S. — at least among some people. Right now, Republicans like Kim Jong Un more than Nancy Pelosi, the House minority leader, according to a new Ipsos poll carried out for the Daily Beast.

It's certainly not all Republicans who walked away from news coverage of the summit feeling this way. According to the Daily Beast, 19 percent of Republicans polled had a favorable view of Kim, and 68 percent said they had an unfavorable view. His results were slightly better than Pelosi's among Republicans, of whom 17 percent view favorably and 72 percent unfavorably.

Pelosi, a high ranking Democrat, as the Atlantic notes, was the first female speaker of the House and has been a Democratic member of Congress for the many years that she has served in that democratically elected governing body. Kim, on the other hand, is a despotic leader who took over the governance of his country when his father died and has ruled it largely through fear, using brutal tactics familiar to scholars of the Eastern European Stalinist regimes in the first half of the 20th century, as the BBC described.

Conservatives and Republicans have used the term "communist" as a derogatory term for Obama and other Democrats for years, as CNN pointed out back in 2012. Kim, however, actually runs a communist country — one of the only remaining ones in the world, in fact, according to the BBC. In Eastern and Central Europe, communism in its later years mellowed into a version of government that, while in many ways oppressive to its citizens, didn't actually threaten their lives if, for example, they expressed an opinion contrary to the regime. Kim, however, run a country much more similar — in very literal, historical ways — to Stalin's Soviet Union.

According to a U.N. report, North Korea under Kim has engaged in crimes against humanity, including "extermination, murder, enslavement, torture, imprisonment, rape, forced abortions and other sexual violence, persecution on political, religious, racial and gender grounds, the forcible transfer of populations, the enforced disappearance of persons and the inhumane act of knowingly causing prolonged starvation."

According to the New York Times, Kim relies on his network of prison camps to keep his populace in line. He's executed at least 340 individuals, including a high-ranking general who lost his life as punishment for falling asleep in a meeting. He had his own brother assassinated at the Kuala Lumpur airport in 2017. The Times also reported that deaths from starvation are also common, and that "deliberate starvation" is often used as a tool against prisoners in the gulags.

This is the character who, according to that Daily Beast poll, is viewed more favorably among Republicans than California Rep. Nancy Pelosi. While there have no doubt been venomous rumors circulated about her in the right-wing media, Pelosi has definitely never had anyone executed using an anti-aircraft gun — as the New York Times reported that Kim did.

Overall, the Daily Beast wrote that Pelosi was the second to least popular member of Congress; the one holding that unenviable honor is Senate majority leader Mitch McConnell. Still, though, it's worth noting that even Democrats, who generally have no great reason to approve of McConnell's actions, still view him significantly more favorably than they view Kim Jong Un. McConnell certainly hasn't been a friend of the left, just like Pelosi hasn't been a friend to the right — but he also hasn't executed a sibling of his in an airport.