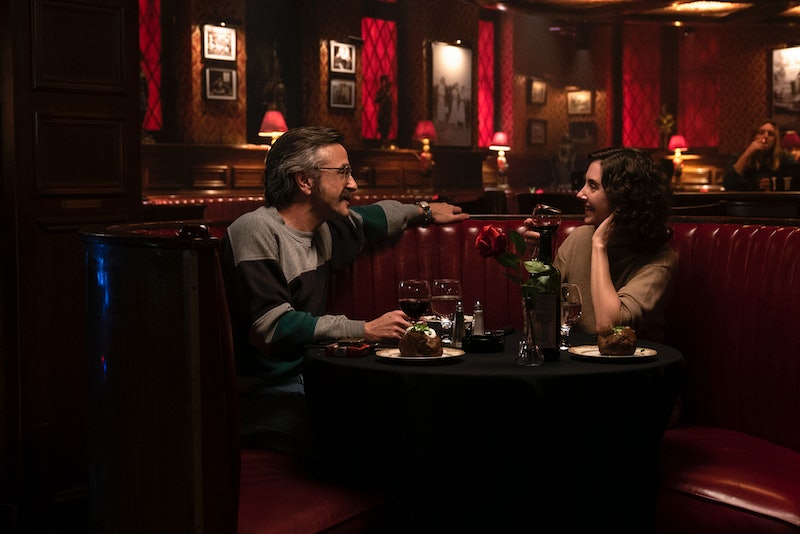 Spoilers ahead for GLOW Season 3. After some building romantic tension between Sam and Ruth throughout Season 2, she ran away from him and right into the arms of camera operator Russell. She's still with Russell when the show picks up, but eventually, Sam and Ruth do get together in GLOW Season 3... only to once again be pulled apart. It's always one step forward, five steps backward with these two.

At the start of Season 3, Ruth is trying to make things work with Russell long-distance while performing for GLOW's Las Vegas residency. But after spending a day with her in the casino, Sam can't help but admit to Ruth that he loves her. She claims that the feeling isn't mutual, but Sam doesn't believe her. So Ruth lists off a number of reasons why she doesn't want to be with him, including his use of cocaine, his anger, and his age. The latter reason really insults Sam, and the pair try to keep their distance from one another while still working on the show.

But being so close to Ruth without actually being with her is painful for Sam, and now that GLOW is pretty much on autopilot, his job directing has become basically useless. So when Justine arrives with a great screenplay, Sam leaves Vegas to help her get the movie made in Hollywood.

The timing couldn't be worse for Ruth, who finally confesses to Debbie — and more importantly, herself — that she also has feelings for Sam. Debbie encourages her to go back to the hotel and tell him, but by the time she gets there, he's already left with Justine.

Months pass by — and Sam suffers a heart attack that he doesn't tell anyone about — before they see each other again. Sam offers Ruth the chance to audition for a part in Justine's movie, which he's since agreed to direct. The audition happens to coincide with Russell telling Ruth that he just took a job in Spain. And while they don't break up, it's clear that long-distance isn't working for them anymore. So when Ruth arrives in California, she's eager to reconnect with Sam.

Once there, Ruth tells Sam she loves him, and they kiss. But just as they're about to go back to his house and sleep together, he lets her know she didn't get the part in Justine's movie. It ruins the moment for Ruth, and she lashes out at him for giving her hope that her career might finally be taking off, only to take it away. Then, she leaves.

The two end the season apart: Ruth turns down Debbie's offer to direct GLOW for her new television network, and Sam formally adopts Justine, afraid that his days are numbered after his heart attack. Should GLOW return, it's unclear where things between them will go from here. They obviously still care about each other, but Ruth is professionally unsatisfied, and may want to put her focus there. She also doesn't know Sam has a heart condition, and with him not obeying his doctor's orders to stop drinking and smoking, his fatalistic attitude may prove to be his demise.

So while yes, it's possible they can find their way back to one another, let's hope they can turn things around for themselves individually, too.