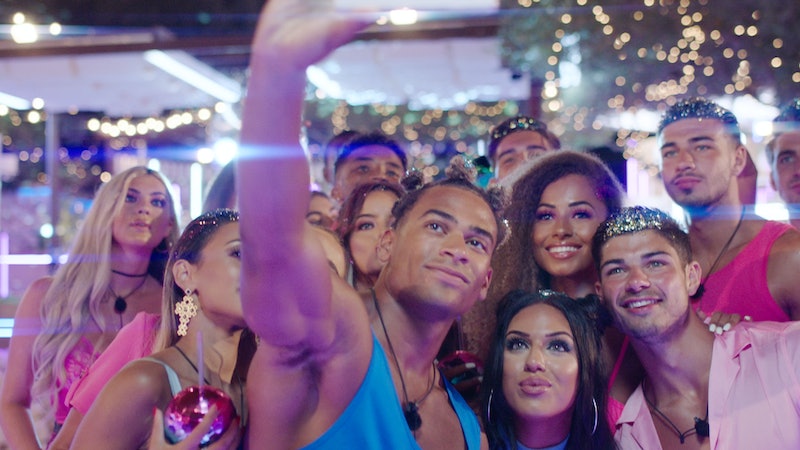 Unless you've been living under a rock, there's a high chance you're more than familiar with the reality TV phenomenon Love Island. Just like previous years, the current fifth series follows a sun-kissed bunch of singletons as they embark on a journey to find love — all within the confines of a villa in Majorca. Although contestants are required to reside within the famous villa during their time on the show, viewers were recently shocked by reports which suggested that participants are allowed to leave the TV compound once a week. But do the Love Island contestants have contact with the outside world?

According to Digital Spy, Love Island contestants have all personal devices taken away upon entering the villa, which of course means no texting or checking Instagram is allowed. So, it's fair to assume that islanders are forbidden from contacting the outside world, however just to be sure, I have reached out to ITV for comment, and will update with any new information once it becomes available.

Although personal devices are not permitted, contestants are often seen fiddling with a mobile phone, however as Heat reports, these devices are provided by the show's producers — and are used by islanders to receive instructions from Love Island bosses and chat to each other.

As mentioned previously, many fans of the ITV2 show were recently shocked to discover that contestants are allowed to leave the villa during their Love Island stint. Former-contestant Kem Cetinay, who emerged victorious in the third series of Love Island, made the surprising revelation during an appearance on This Morning. When asked why the series doesn't air on Saturday nights, Cetinay told the ITV daytime hosts, "People are going mad on Twitter as to why it's not on Saturdays but I know why. Most people don't know this but islanders get a day off every week from the show. Normally we go to the beach and we just chill out. There are no microphones."

Going into further detail, the former-islander explained, "So what happens is, when you take the microphone off you're not allowed to talk about anything to do with the show or the couples, you have to talk about home-life and things. And you're being watched by an eagle hawk, by the producers because they don't want you to talk about what's going on."

The Love Island winner went onto clarify the very hygienic reasons for the assigned day-off. Speaking to hosts Holly Willoughby and Philip Schofield, he said, "what happens is it gives them a day to clean the whole villa... It's more a day off from all the intense games and dates, deciding who you like and don't like and flirting with girls of course."

Although contestants are treated to a weekly timeout, they must still adhere to a strict set of rules. According to Digital Spy, the Love Island rules touch upon nudity, smoking, and even branded clothing — so perhaps villa life isn't quite as easy as it seems.

Love Island airs every night at 9 p.m. on ITV2.

More like this
'Love Island' Has Added Yet Another Bombshell To The Villa
By Bustle UK
Every Season Of 'Love Island' Ranked Best To Worst
By Alice Broster, Frances Stewart and Sophie McEvoy
Molly-Mae & Tommy Fury Revealed Their Baby Girl's "Really Unusual" Name
By Sophie McEvoy and Sam Ramsden
The ‘Love Island’ 2023 Cast Is Messy AF
By Jason Okundaye
Get The Very Best Of Bustle/UK
Sign up for Bustle UK's twice-weekly newsletter, featuring the latest must-watch TV, moving personal stories, and expert advice on the hottest viral buys.