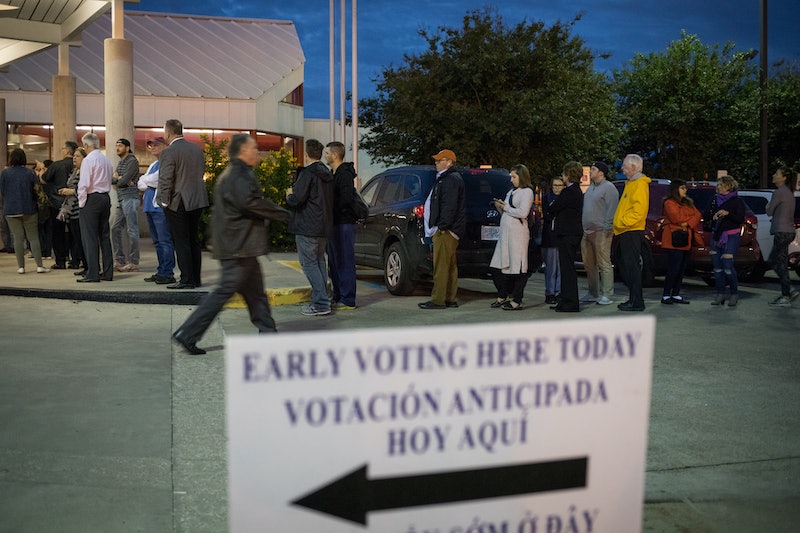 Some voters in Texas have reportedly found voting machines changing their votes from one choice of senator to the other when voting a straight ticket (for one political party in all the races on the ballot). But there's always the option to vote election by election, candidate by candidate, to choose who you like the best. While you don't have to vote for everything on your ballot, political experts suggest that you do.

First off, technically, no, you do not have to mark the whole ballot. Lots of online voter resources make that clear. You might run into some technical problems with voter machines if you leave the top of the ticket blank, but you have the right to do just this and can call voter protection hotlines like 866-OUR-VOTE for help.

Official election websites say the same thing. The Michigan Secretary of State has the information as a part of their question-and-answer section. "Must I vote the entire ballot?" it reads. With answer:

You are not required to vote the entire ballot. You may pick and choose the races or ballot questions for which you want to vote. Skipping sections of the ballot does not invalidate your ballot.

And many people will decide to leave things blank. Weld County Clerk and Recorder Carly Koppes in Colorado told The Greeley Tribune that many voters there — in a swing state with a close governor's race — will only vote for president (and, no, that's not this year's election). "It is not a requirement that you vote for everything,” she told the paper. “It's up to you. It's your vote."

But political operatives would ask you not to do that. David Axelrod, a former Obama adviser, and Republican strategist Mike Murphy wrote an op-ed together for Vox before the 2016 elections on why it's important to vote down the ballot, too. Yes, they penned the piece together.

"Our decades in politics, advising candidates at the local, state, and national level, have taught us that elected officials matter all the way down the ballot," the two write. "They make decisions that affect our lives every day — from monitoring water quality to levying taxes and deciding how that money will be used to choosing the leadership of our schools. If these officials make poor policy decisions, the consequence can be costly."

If you don't feel like you know enough about the races down ballot, you're not alone. But there are ways to educate yourself if you choose to vote for everything you're entitled to. One resource is BallotReady, a website that lets you input your exact address and receive exact ballot and election information. It has information on who's running for U.S. senator, governor, the state legislature, and even county-specific races like conservation trustee.

You can click on the candidates and find out more about what they stand for and their positions — if the information is available. You can also select the candidates you like and add them to "your ballot." This lets you keep track of who you liked and bring it with you to the polling place.

And, if you'd prefer to do a straight ticket vote — all for Democrats or all for Republicans — don't let the word from Texas worry you. Most of the issues were caused by user error and were quickly fixed with the help of poll workers.