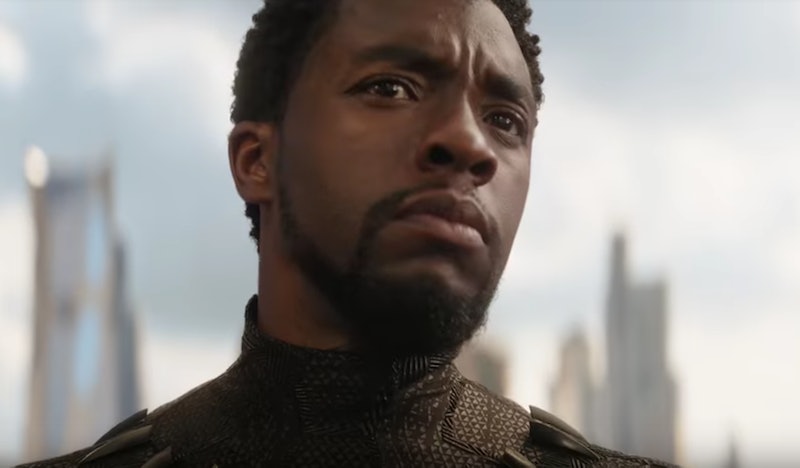 When you're a fan of the Marvel Cinematic Universe, it's hard to imagine missing a movie that comes from the studio. The newest installment to the superhero saga, Avengers: Infinity War, has been billed as the biggest one yet, and it will likely draw in crowds that aren't necessarily familiar with every single Marvel movie. You should definitely see Black Panther before Infinity War, though, and that's not only because Black Panther continues to break box office records and is generally a great movie. It's because Infinity War, which comes out on April 27, will revolve around a major moment from Black Panther's post-credit scenes.

In Black Panther, viewers became acquainted with the many faces of Wakanda, the fictional African country that remains cloaked from the rest of the world throughout the movie. Wakanda must remain hidden because it holds a powerful energetic resource called vibranium. Black Panther spoilers ahead! In the first post-credit scene, though, the Black Panther, aka T'Challa (Chadwick Boseman) announces at a United Nations conference that Wakanda plans to share its resources with rest of the world. And in a recent trailer for Infinity War, Okoye (Danai Gurira) remarks, "When you said we are going to open Wakanda to the rest of the world, this is not what I imagined." When T'Challa asks her what she had thought it meant, she responds, "The Olympics, maybe even a Starbucks."

Although T'Challa and Okoye's exchange provides the otherwise intense commercial with a burst of comedy, it also might have a deeper meaning. The intention behind T'Challa choosing to share Wakanda's vibranium with the world is, as Nakia (Lupita Nyong'o) advises T'Challa in Black Panther, to allow Wakanda's fellow African countries to thrive, as well as to mobilize Black people who were spread by African diaspora. T'Challa's intention behind sharing Wakanda's resources did not have anything to do with the Avengers, yet as you can see from the Infinity War trailers, Wakanda plays an integral role in the upcoming movie.

And it's not just about vibranium. The second Black Panther post-credits scene shows a seemingly rehabilitated Bucky (Sebastian Stan) in Wakanda, having been un-brainwashed by Shuri (Leticia Wright). The Winter Soldier will definitely play a big part in Infinity War, fighting alongside T'Challa and the others. Since Black Panther previously fought alongside some of the Avengers in Captain America: Civil War, his involvement in Infinity War shouldn't come as as a surprise to anyone. The idea that Wakanda itself would serve as a setting for Infinity War, though, probably does come as a shock for some MCU viewers, it might mean something extremely ominous for all of the inhabitants of the fictional African country.

One of the most prominent theories regarding the unknown Infinity Stones is that Wakanda's source of vibranium is the Soul Stone. Thanos could use the Infinity Stones to destroy the universe should he get his hands on each of them, and not only that, but he might destroy Wakanda in and of itself while attempting to retrieve the Soul Stone. All of these high-stakes threats likely stemmed from Black Panther's post-credits scene in which T'Challa announces Wakanda's un-cloaking to the rest of the world.

Even if you don't go see Black Panther before seeing Infinity War, you will definitely need to have the information about Wakanda's formerly secret resource of vibranium. Thanos will likely do whatever it takes to gather the Infinity Stones — which will likely lead to at least one superhero's death — and the more you know about the stones, the better you'll understand Infinity War.