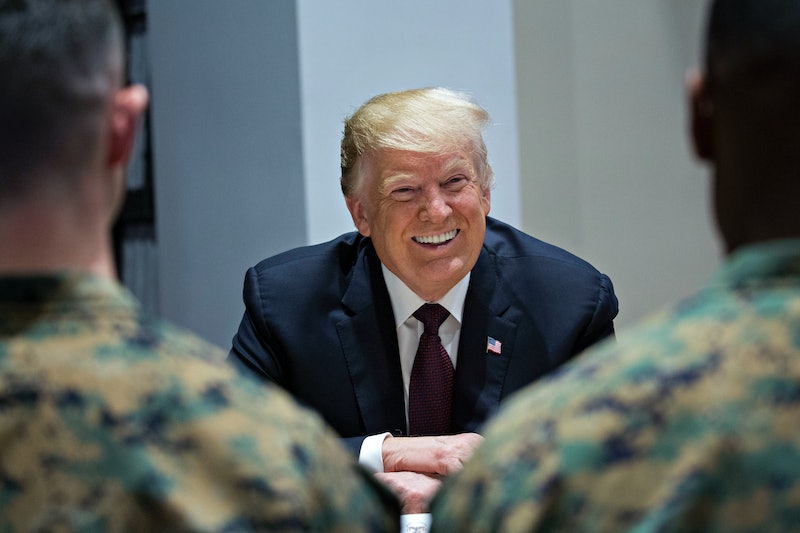 On Thursday, the White House confirmed that the president is planning to declare a national emergency after signing the government spending bill. You might be wondering if a national emergency includes martial law — and the truth is that it can entail this. But more often than not, it doesn't.

This national emergency will mark the 59th in the country's history; more than 30 of those emergencies are still in effect today, per ABC News. So even though the phrase "national emergency" might immediately conjure a sense of panic, it's important to keep in mind that many of those emergencies exist for years, and don't necessary upend civilian life. With that said, it's also important to keep in mind that POTUS does have the executive power to do so.

Per The Atlantic, the moment the sitting president declares a national emergency, his powers extend further than normal and he has the capacity to engage within more than 100 special provisions to him. These provisions include the ability to freeze American bank accounts, shut down various forms of electronic communications, and yes, allow the activation of martial law, the publication explains. But it's a little more complicated than that.

According to The Atlantic, there's a specific Supreme Court ruling from 1866, Ex part Milligan, in which the Court affirmed that martial law would be appropriate in certain cases of war or emergency, at the same time that it affirmed that the president couldn't use war or emergency to bypass laws established in civilian courts. In other words, the court case was a mixed bag, which simultaneously allowed and didn't allow POTUS to use martial law, depending on the circumstance.

Additionally, a 2007 report by the Congressional Research Service maintains that the president has the right to "institute martial law" under national emergency powers.

Under the powers delegated by such statutes, the President may seize property, organize and control the means of production, seize commodities, assign military forces abroad, institute martial law, seize and control all transportation and communication, regulate the operation of private enterprise, restrict travel, and, in a variety of ways, control the lives of United States citizens.

To be clear, though, this doesn't mean that once a president declares a national emergency, his actions go entirely unchecked. It's still possible for Congress to terminate a national emergency via a joint resolution from both chambers, according to USA Today.

It's worth noting that martial law, though potentially permissible under a national emergency, is incredibly rare: It has only been declared once at each the national and regional levels in U.S. history — during the Civil War and during World War II, respectively — per the online Encyclopedia.

Trump has not yet made the official national emergency declaration. However, White House Press Secretary Sarah Sanders did explain POTUS' upcoming decision on Thursday afternoon. Sanders stated in part (via CNN), "The president is once again delivering on his promise to build the wall, protect the border, and secure our great country."