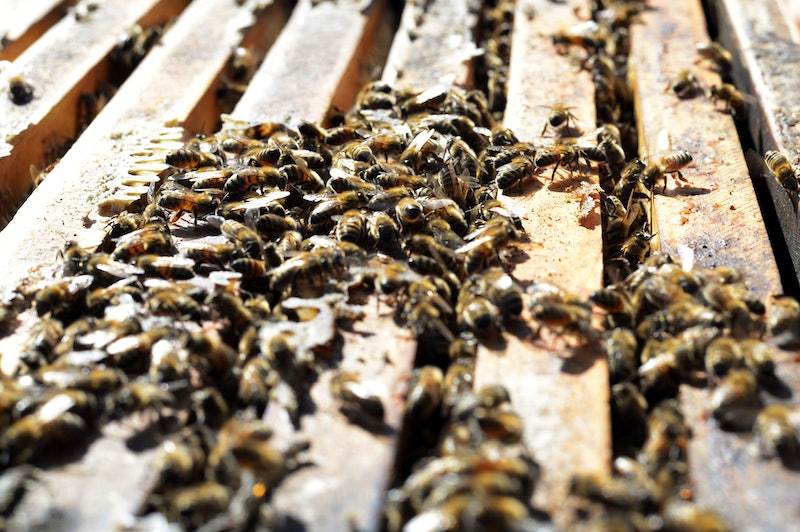 Across the globe, bee populations have been suffering massive losses related to climate change since at least the previous decade. From habitat loss to pesticide exposure, there are any number of contributing factors to high bee mortality rates. On Dec. 8, The Guardian published a new report linking almond milk farming to mass bee die-offs, likening the practice of bringing bee colonies to pollinate almond farms to "sending bees to war."

In winter 2018-2019 alone, more than 50 billion bees died in circumstances that many environmentalists and organic beekeepers suggest is related to farming almonds for 'milk.' Bees aren't just cute and fuzzy — they're also needed for the pollination that makes crop growth possible, and that includes almond production. Almonds grown in California alone account for 82% of the entire world’s almond supply, and these crops are doused in potentially bee-killing pesticides. Industrial almond production also clusters billions of bees far closer together than is considered safe in terms of spreading bee sickness, The Guardian reported, and almond-pollinating bees are brought out of their winter dormancy months earlier than they would normally wake. Bee deaths related to these agricultural industry issues may account for the destruction of more than a third of commercial bee colonies in the U.S.

The use of bees in almond production will only grow as the demand for almonds across the country continues to increase dramatically. The Washington Post reports that they are now the most frequently-consumed nut in the U.S. To grow almonds at the rate demanded by America's thirst for almond milk and other almond-based products, California’s almond industry keeps its bees in monocultures, with land solely dedicated to one crop. This limits bees’ access to diverse sources to pollinate, which — in addition to pesticides and disease from population clustering — can lead to both bee death and crop failures.

According to a 2019 study published in the journal Ecological Indicators, it’s not just bees that are impacted by the spike in demand for products like almond milk. With California’s limited water resources, the study found that almond production has a very large water footprint — it takes over 12 liters of water to produce a single almond kernel. In the context of the ever present dangers of climate change, water shortages are not to be taken lightly.

So what happens when you love the planet, bees, and your almond milk latte with an extra shot? The University of California San Francisco’s Office of Sustainability suggests buying certified organic almond milk, because it often requires less water to produce than conventional almonds, and doesn’t use pesticides. You might also want to practice alternating between your use of various non-dairy milks, because they all have their own unique benefits and environmental impacts. Pro-tip: according to Inhabitat, coconut, hemp, and oat milk require less water and have less of a carbon footprint than soy and rice milk. Oat milk lattes tend to be foamier anyway, so maybe order one next time. For the bees.