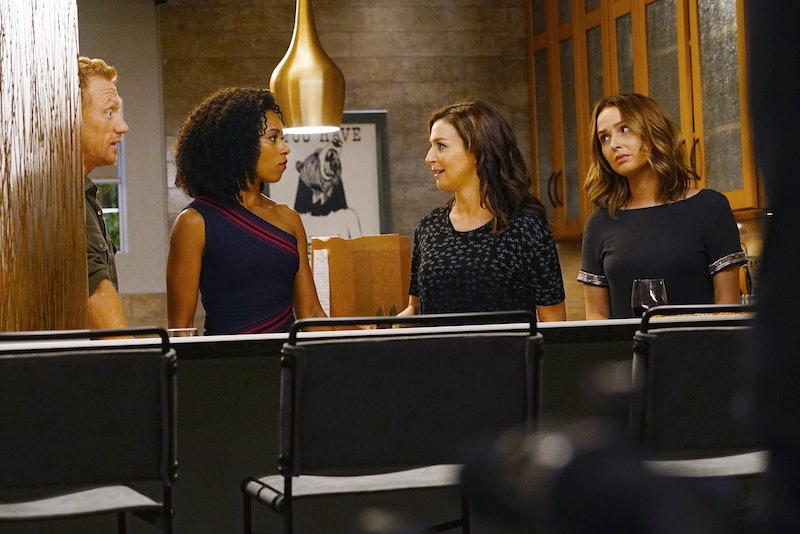 Amelia Shepherd is the Eeyore of Grey's Anatomy — there is a permanent rain cloud over her head. Nothing goes right for her, and it's getting worse — she has a brain tumor. Will Amelia die on Grey's Anatomy? She's been acting pretty erratic, but everyone in Grey Sloan figured it had something to do with her lingering PTSD from the many, many bad things that had happened to her in her life. Amelia's father was murdered in front of her eyes when she was a kid. Then, she got addicted to drugs. Next, she and her addict boyfriend, Ryan, overdosed and he died. This is like a parade of sadness, right?

But it keeps going — After Ryan's death, Amelia found out that she was pregnant with his baby and that baby suffered from anencephaly and never developed a brain. He died right after birth. Amelia then got engaged again and broke it off the move to Seattle. Then, Derek died. So, yeah, not a great couple of years for Amelia Shepherd. Her marriage to Owen is also on the rocks, and it's easy to assume that her behavior can be tied to her past drug use and general bad luck and inability to deal with it. But, no — there is something medically wrong with her.

From the looks of Grey's Anatomy previews, Amelia wants to keep this diagnosis close to the vest. The only people who know about it are Amelia, DeLuca, and Carina, and Amelia doesn't relish anyone else knowing about her tumor. This is typical Amelia — she has been hurt, so she doesn't want to share. Normally, that could make sense, but in this case, sharing her tumor could save her life. It's not like she can operate on her own brain, which she would probably try to do.

Obviously, Owen should know, since they're married, but because they're in a bad place right now, Amelia will want to do this on her own. Kevin McKidd told Variety that he'll be kept in the dark for a little while longer:

"Owen doesn’t know about the tumor and he doesn’t find out for a bit. It’s interesting, because even before Owen finds out about the brain tumor, which will happen in the next few episodes, Teddy’s words after that kiss wake him up to the fact that he needs to look at his life. And it’s what his sister is saying to him throughout the episode, it’s what his mother is saying to him throughout the episode, but none of these people know that Amelia has a brain tumor, so he’s already in that space of 'I really need to get some answers about what this marriage is or isn’t,' so when the tumor is revealed, of course he steps up to be by her side and absolutely goes, 'Well, if you have a tumor, then that explains it and we have to fix this,' but on Grey’s it’s never as easy as that. It’s a very interesting time for the two of them."

Will Amelia die? It doesn't seem in the near future like that's the case. But in order to live, Amelia needs to admit that she is sick and let the other people into her life to help save her. Maybe she'll be able to if she sees that her brain tumor could be exacerbating her erratic behavior. But then again, Amelia is stubborn as a mule, and she never wants to let anyone in. Grey's Anatomy will have to show her she's not alone — otherwise she could be done for.