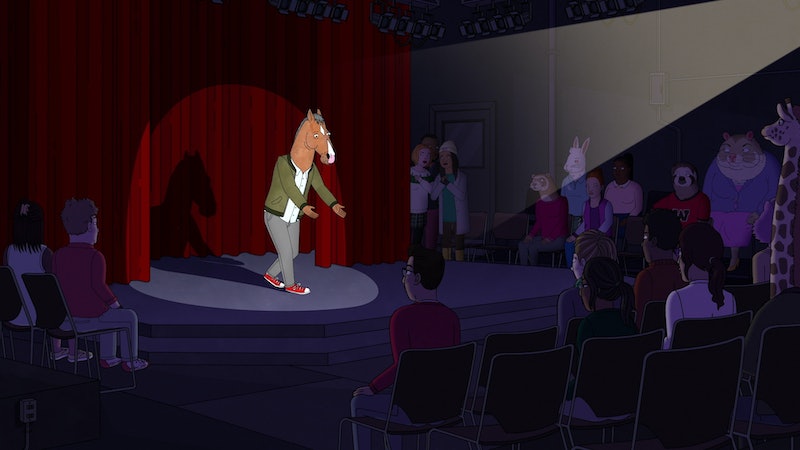 Spoilers ahead for the BoJack Horseman series finale. As a death showcase unfolded in front of BoJack in the penultimate episode of BoJack Horseman, it seemed inevitable that he would meet the same fate as the people performing. BoJack dying in the series finale by drowning was the perfectly obvious conclusion for his character once it was imminent. But after setting up his grand finale, BoJack Horseman instead saved its leading man in the last episode, leaving him to live with his sins until his curtain call does eventually come.

There's some significant manipulation on the part of the show to make the audience believe BoJack's fate is sealed. "The View from Halfway Down" ends with the black tar Charlotte had warned BoJack about consuming him and the sound of a heart monitor flatlining. But, mirroring the pilot, the heart monitor is the Horse's on the Horsin' Around Blu-ray BoJack had been watching. After spending time with Herb Kazzaz, his mother Beatrice, Sarah Lynn, a hybrid of Secretariat and his dad Butterscotch, Zach Braff, his uncle Crackerjack, and his Secretariat costar Corduroy Jackson Jackson in the throes of death, Bojack was saved from drowning to death by the family who had purchased his house.

The series seeped with clues that BoJack would die by drowning, starting with every opening credits featuring him falling into his pool. His idol Secretariat died by suicide after he jumped off a bridge. He has a David Hockney-ripoff painting of himself in the pool that he once saw himself flailing in during a drug trip. In Season 3's "Fish out of Water," he said his mother tried to drown him in a bathtub. Later in that same season, he drove his free Tesla into the pool. Just moments before the Telsa incident, Diane had told him he would push everyone away and when he eventually decided to kill himself, no one would be there for him.

Diane's words were bitterly prophetic. But perhaps as unexpected as the "too dark" Horsin' Around series finale where the Horse died, BoJack's death didn't turn out to be an inevitability. Yes, the visions of the dead characters kept reminding BoJack during their bizarre dinner and show that death comes for us all. But they also noted that most of us don't have much control over when we die. For BoJack, it was chance that he once again survived his self-destructive behavior when others, like Sarah Lynn, did not.

BoJack's survival is neither reward nor redemption; that he happened to live is no reflection of the rights or many, many wrongs he perpetrated in his life. By living, he does face some retribution since he's sentenced time in a supermax prison for breaking into his old home. But his transgressions won't be erased, the people he hurt will still feel the damage, and everyone will have to continue to live like that. It's like what Diane says at Princess Carolyn's wedding, "Sometimes life's a bitch and then you keep living."

During his mother's funeral in Season 5's "Free Churro," BoJack said, "You never get a happy ending 'cause there's always more show ... I guess until there isn't." That perhaps was the biggest foreshadowing of all when it came to BoJack's fate. The actual show BoJack Horseman may be over after Season 6. But true to life, BoJack's ending didn't provide a sense of finality, either happy or sad. He'll continue to plod through life until his show — or rather, BoJack himself — simply ceases to exist.