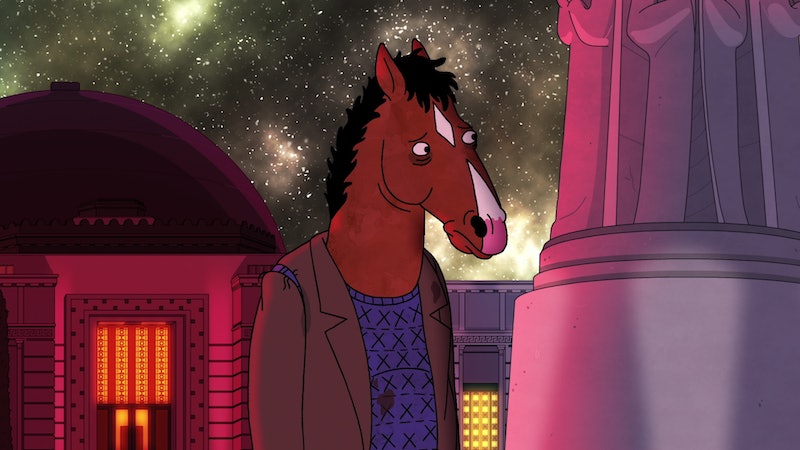 Spoilers ahead for BoJack Horseman Season 6 Part 1. After years of saying he'd never change, BoJack finally got sober in the final season of the show. But just because he has begun to take accountability for his actions doesn't mean BoJack is guaranteed a happy ending. The BoJack Horseman Season 6 midseason ending sets up the final episodes to have all of BoJack's past crimes come crashing down on him. Besides the revelation that BoJack was with Sarah Lynn when she died, his inappropriate relationship with Penny is about to be exposed as well. Meaning that when Season 6 Part 2 drops on January 31, 2020, the BoJack Horseman finale will also serve as BoJack's final reckoning.

BoJack never wanted to enter rehab, but once he arrives at Pastiches Malibu Rehabilitation Center in Season 6 Part 1, he never wants to leave. Yet, through his months at the facility examining how his parents' abuse shaped his relationship with substances and opening up about the people he has hurt, he really was ready to re-enter the world. But now that he's sober, the mistakes he made haven't merely disappeared.

In the midseason finale, two Hollywoo Reporter journalists are coming close to discovering that BoJack was on the bender with Sarah Lynn that led to her death. And Hollyhock is about to learn what her half-brother did back in Season 2 while in Tesuque, New Mexico.

The events from the Season 2 episode "Escape from L.A." have haunted BoJack throughout the series. But beyond his sister possibly being ashamed of him, his time in New Mexico is also going to directly connect him to Sarah Lynn's death. When Secretariat was falling apart, BoJack went to New Mexico to reconnect with Charlotte. He was upset to discover his long-lost love had a family, but ended up bonding with them and staying on his yacht in their driveway for two months. But the fantasy of a future with Charlotte came crashing down after BoJack took her daughter Penny to the prom.

While it started innocently enough, Pete Repeat (who now goes by Peter) recounting the story to Hollyhock of what happened to his girlfriend Maddy is a brutal reminder of how inappropriate BoJack was. He purchased bourbon for the teens and when Maddy experienced alcohol poisoning, BoJack abandoned her and Pete at the hospital so his public image wouldn't be tarnished. Yet, whether Peter knows it or not, that wasn't the end of BoJack's disturbing behavior. When Charlotte rejected him, BoJack took the teenaged and vulnerable Penny up on her offer to have sex.

Charlotte stopped them before they went through with the act. But BoJack wasn't able to shake that he ruined this family. An inebriated confession at an AA meeting with Sarah Lynn is actually what has led The Hollywood Reporter reporters to Tesuque. They will inevitably discover BoJack's identity and connect that he was the one who encouraged Sarah Lynn to begin using alcohol and drugs again.

The Season 6 opening credits display all of BoJack's major regrets, including Sarah Lynn at the Planetarium and Penny in Tesuque. (Not to mention Gina, who has PTSD after BoJack strangled her on the set of Philbert.) While he has atoned for these sins in rehab, BoJack will have to face them in real life in Season 6 Part 2.

Hopefully, rehab has given BoJack the tools he needs to take responsibility and not begin using again. The public will hold him accountable (something he wished would happen during the Season 5 finale), but in the end, BoJack must be able to live with himself.

It's not really a question of if BoJack will have to face the music, but how he will handle it once the truth comes out. Even though it won't technically be "happy," the happiest ending for BoJack Horseman will be for him not to run away and face his actions head-on. Because while he can't change what he did in the past, from here on out, he can do what Diane told him — "Do less bad stuff and more good stuff." And accepting the fall for his past missteps is a step toward that good stuff.

More like this
Ozzie’s Coming Out Scene With Kitty On 'That ’90s Show' Has Twitter Sobbing
By Brad Witter
Here’s Everything Coming To & Leaving Netflix In February
By Jake Viswanath
Everything To Know About A Potential 'Lockwood & Co.' Season 2
By Gretchen Smail
All The ’70s Easter Eggs You Missed In 'That ’90s Show'
By Grace Wehniainen
Get Even More From Bustle — Sign Up For The Newsletter
From hair trends to relationship advice, our daily newsletter has everything you need to sound like a person who’s on TikTok, even if you aren’t.