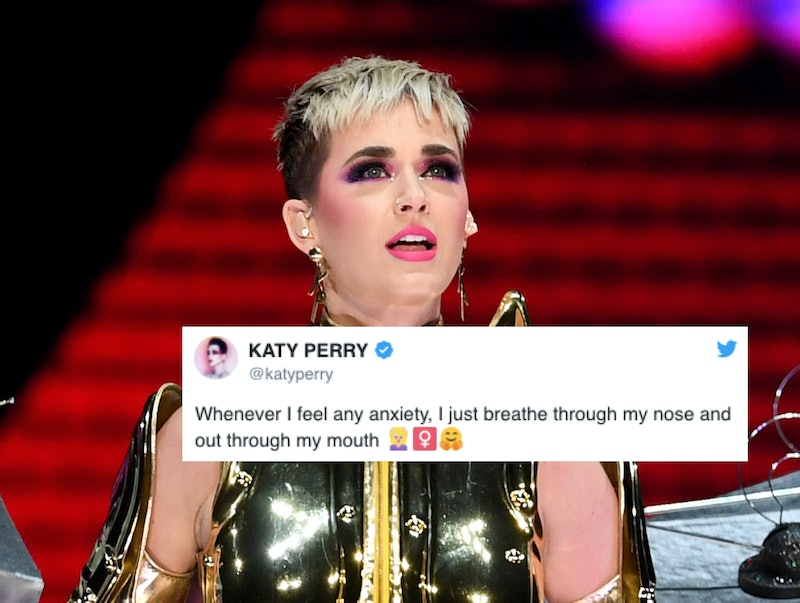 When you have mental health issues, the only thing more predictable than feeling poorly on a regular basis is the awful but well-intentioned advice you'll receive from people. When I first wrote about my depression and anxiety in a public space, I received a barrage of tips from strangers — including one woman who recommended that I ditch my medication and try Scientology instead. So when Katy Perry tweeted about what she does for her anxiety on April 4, many people's immediate response was to clap back. The musician is being criticized for an emoji-filled tweet that reads, "Whenever I feel any anxiety, I just breathe through my nose and out through my mouth" — because, well, deep breathing is not a cure for anxiety.

Perry has been open about her own mental health struggles in the past, and once live-streamed a therapy session to share her experiences with fans. And it's possible that Perry was conflating anxiety with nervousness, for which breathing can actually be a pretty effective technique. Also, her tweet didn't say that this was a definitive fix for anxiety — it's simply a self-care technique that has helped her. But people with mental illness are tired of people suggesting quick fixes or simple ways to "get better," which is why the tweet struck a nerve, so to speak, with so many of us.

"Anxiety is an actual medical diagnosis, while 'nerves' is a common language term to describe a part of the subjective feeling that one may have with anxiety. Keep in mind that anxiety is a general diagnosis under the umbrella of anxiety disorders and may be specific to social situations, sleep, school, personal relationships, job performance, etc.," Gregory Lane, DACM, LAc., tells Bustle.

Clinical anxiety can be exacerbated by stressful or nerve-wracking situations, but it's not the same as having butterflies in your stomach before a job interview or, say, a Super Bowl performance. It's important to make the distinction when we're discussing mental health, or else we end up minimizing the very real fear that people with anxiety deal with.

What's more is that deep breathing can absolutely be an effective tool to stop panic attacks — during one of my psychiatric hospitalizations, I learned diaphragmatic breathing exercises to calm myself down in anxious moments. "Breathing exercises have long been known to have a calming effect on the body and mind," Lane says. "Breathing exercises in addition to other stress management techniques such as meditation and physical exercise have been shown in studies to help people with anxiety calm themselves."

But he tells Bustle that breathing exercises are only one part of a comprehensive treatment plan. "It would be irresponsible to assume that any exercise alone can cure anything. As with any potential medical condition, [it's] imperative that a person checks with their physician prior to embarking any regimen, natural remedies, pharmaceuticals or otherwise," he tells Bustle.

It's important to not invalidate Perry's mental health experiences, while also being mindful that people with mental illnesses are also able to say insensitive things that further stigma. I've been called out before after using problematic language to describe mental illness, so it's important to realize that even those who have experienced anxiety can still say hurtful things. Anxiety is a complex medical condition with no easy solution. Fans have stepped up to say that people are making unfair assumptions about Perry's intentions, but the impact of her statement still needs to be addressed. People who live with anxiety already deal with belittlement and silly suggestions, which is why it's important to take our concerns seriously, even if the person giving advice means well.

More like this
I Was All For Medicating Mental Health Issues – Just Not For Me
By Anonymous, as told to Dana Smith
I’m on Two Mental Health Medications and I Only Love One
By Anonymous, as told to Dana Smith
The UK Abortion Laws In 2022, Explained
By Sophie McEvoy
6 Abortion Advocates To Follow On TikTok
By Sara Youngblood Gregory
Get Even More From Bustle — Sign Up For The Newsletter