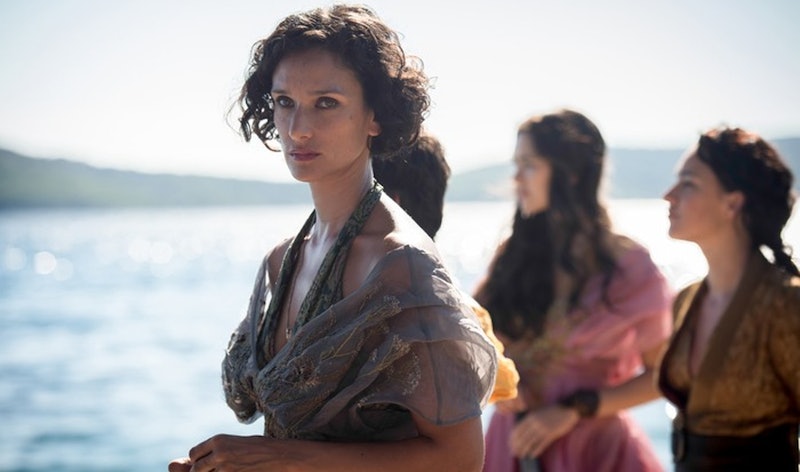 Things really took a turn for the bloody side towards the end of Sunday's Game of Thrones episode "Stormborn." After Dany met with Ellaria, Yara, and Olenna to discuss their military strategy, she and Tyrion sent Ellaria to be escorted back home by Yara in order to rally the Dornish army for Dany's cause. Unfortunately, their ship ran straight into big, bad uncle Euron's fleet of thugs and things went downhill really fast. There were a lot of deaths that happened in a short span of time and with the dark atmosphere of the scene, it was tough to decipher what was happening at times. So, did Ellaria die on Game Of Thrones?

I don't think she is dead quite yet. You see, we never saw her die on screen and fans know what that usually means in the Game of Thrones world. (No body, no death. And, in the case of Jon Snow, a body can still mean not dead forever.) While Euron's shady men were holding Ellaria, she pleaded with them to just kill her and get it over with already. Their response to this was shaking their heads with a grin and then dragging her off somewhere.

Honestly, Ellaria may have been better off being slaughtered on that ship because — major spoilers ahead — the eagle eyes at Watchers On the Wall dug up some photos from the set of next week's episode that may reveal Ellaria's fate. In these photos, it can clearly be seen that Yara, Ellaria, and one of the Sandsnakes are being paraded through the streets of King's Landing by Euron, presumably to be brought as that gift for Cersei. If you remember, Ellaria happens to be the person who planted that fatal kiss on Cersei's daughter Myrcella. So, she may be in for something much worse than quick death, considering what we have already seen Cersei to to Septa Unella. Shame.

Let's hope that this band of feisty, strong women can figure out a way to escape Euron's clutches before they make it to Cersei. If they don't, then their fans are likely in for a rough ride.