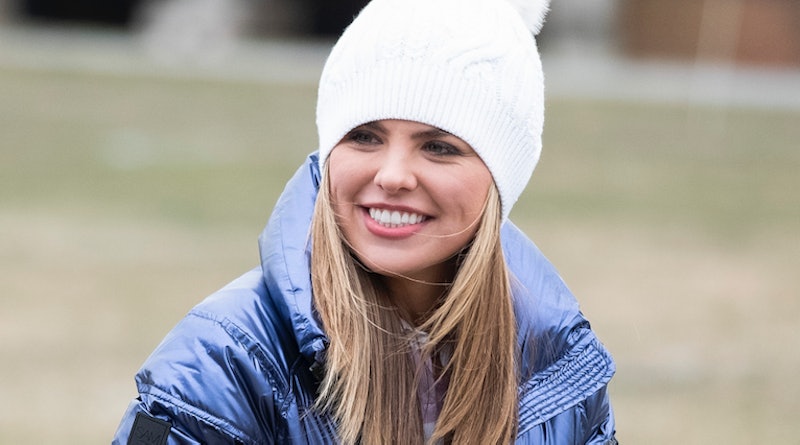 Unless you're Colton Underwod, getting engaged is kind of the end goal when you're on The Bachelor or Bachelorette. Choosing a ring and proposing are big to-dos filmed by production, and it's assumed that anyone who makes it to the final stages is serious about finding a spouse. But does Hannah get engaged on The Bachelorette? The trailer for the rest of the season that aired on Monday night shows Chris Harrison coming to Hannah with some big news.

"This is gonna change everything. He went and got a ring," Harrison tells Hannah in a preview without mentioning which man he's referring to. "He is fully convinced that you are the one. He has a ring in his pocket right now. He is ready to propose to you."

Hannah... doesn't look thrilled! Though proposals are nothing new, this seems like it comes out of left field, and not when she's picking from her final two men as it usually does. Hannah seems shocked by the news, and immediately starts crying off to the side. "I'm obviously struggling," she says in a dramatic voiceover. "Things would've been so different if he wasn't here, and right now I don't know what to do."

So is a proposal coming down the pike, or is this some tricky editing by the show to get us all talking? Harrison calls the remainder of the season "shocking," but he says that pretty frequently. Still, as Colton proved last season, non-traditional endings are definitely on the table.

Hannah has hinted before that she might have an unconventional end to her season, and while she hasn't confirmed that she got engaged during the finale, she hasn't said that she didn't, either. Entertainment Tonight reported that a finale episode was filmed, so Hannah apparently doesn't duck out early with whoever decides to pop the question. But she said in the same article that her season's ending "was not how [she] thought it would be," even though that "doesn't mean that it's not good."

Fans are already speculating who pops the question, and one name keeps coming up again and again. Plenty of viewers think it might be Luke, who has already proven he has trouble taking "no" for an answer:

This would be particularly bananas given the heated argument the same trailer shows Luke and Hannah having about sex. I'm inclined to think that Hannah wouldn't give a proposal from Luke a second thought after that interaction, but he has come storming back into the house before, and it wouldn't be surprising if he did it again.

Honestly, this would be very in character for Luke P. Hopefully, though, Hannah doesn't give him the time of day, and all this proposal will do is solidify his spot in the Bachelor/ette villain hall of fame. Seriously, a man who doesn't take "no" for an answer is not attractive, no matter what the old movies might tell you. Here's hoping Hannah gets engaged this season if that's what *she* wants, and that it's to someone who respects her boundaries and her independence.