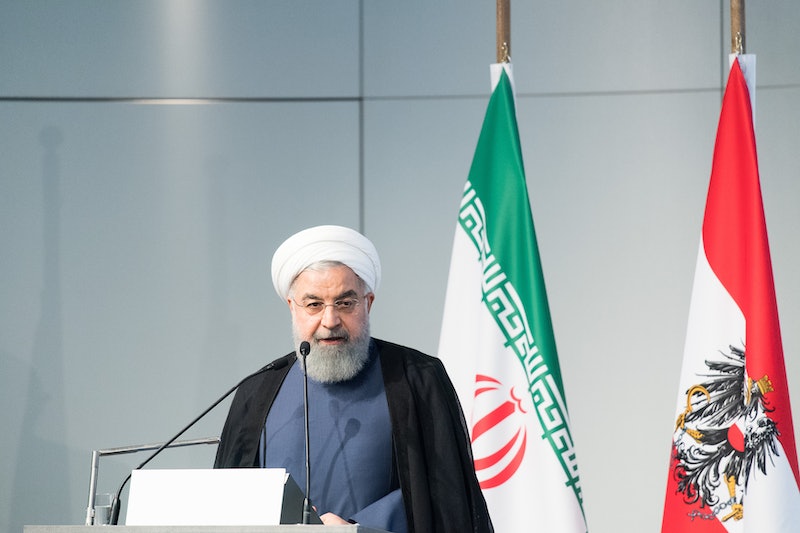 For over a week, it seemed President Trump's relationship with Russian President Vladimir Putin was all that anybody could talk about. But after the president sent out a particularly exclamatory tweet on Sunday, all heads have turned away from Russia and toward the Persian Gulf. Once again, the Iranian nuclear program is at the center of attention, and you may find yourself wondering whether or not Iran actually does have nuclear weapons. The answer is complicated.

As CNN reports, Ayatollah Ali Khamenei has maintained that Iran does not have nuclear weapons under the premise that such weapons are forbidden by Islam. But as rhetoric between President Trump and Iranian President Hassan Rouhani intensifies, it's reasonable to wonder whether or not that is actually true.

Reuters reports that Rouhani was speaking to a group of diplomats when he specifically mentioned the American president by name. "Mr Trump, don’t play with the lion’s tail, this would only lead to regret," he said.

Trump responded in a tweet written almost entirely in capital letters, warning Rouhani to take caution and "NEVER, EVER THREATEN THE UNITED STATES AGAIN" lest he "SUFFER CONSEQUENCES THE LIKES OF WHICH FEW THROUGHOUT HISTORY HAVE EVER SUFFERED BEFORE."

It's impossible to know for certain whether Iran has developed — or is working on developing — nuclear weapons. While they do have a small nuclear program, that program is supposed to be for the purposes of nuclear energy, according to the tenets of the Joint Comprehensive Plan of Action (JCPOA), a nuclear nonproliferation treaty among the United States, Iran, France, Russia, China, the United Kingdom, and the European Union, colloquially referred to as the "Iran deal." In May, however, Trump announced he planned to pull out of the deal.

"The agreement was so poorly negotiated that even if Iran fully complies, the regime can still be on the verge of a nuclear breakout in just a short period of time," Trump said at the time. "The deal’s sunset provisions are totally unacceptable. If I allowed this deal to stand, there would soon be a nuclear arms race in the Middle East. Everyone would want their weapons ready by the time Iran had theirs."

Whether or not the Iran deal was the best course of action for averting nuclear war is fiercely debated among experts. However, back in 2015, President Obama argued that the deal, at minimum, provided the international community at least a decade to learn more and make new decisions about how to handle Iran's nuclear program.

While it's not clear whether or not Iran has nuclear weapons, it is clear that Trump's administration is taking a hardline stance against its perception of Iran's nuclear program. It will be important to keep an eye on the U.S-Iranian relationship as rhetoric between both countries intensifies.