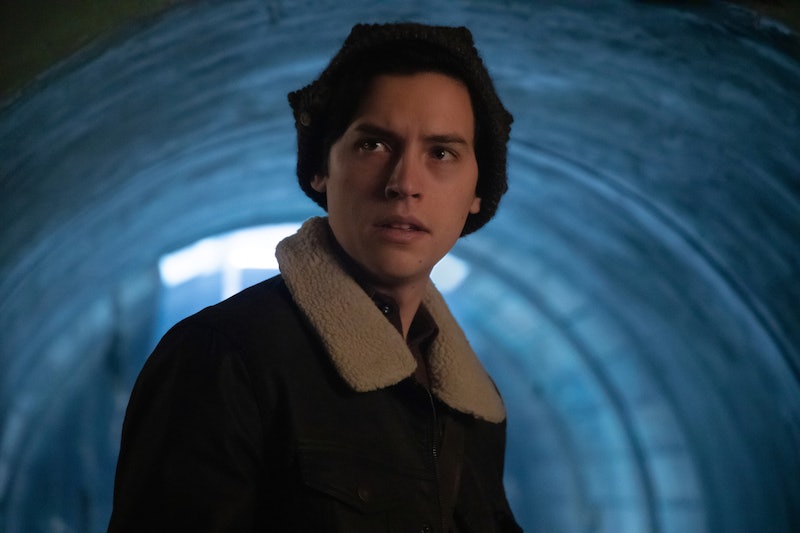 Jughead fans, brace yourselves. The Riverdale Season 4 promo dropped on Wednesday and there's a lot to unpack. Most importantly, the trailer may have revealed Jughead's fate after that Season 3 finale cliffhanger. And, yes, there's good news and, of course, bad news.

Let's begin by clarifying the timeline of everything happening in the trailer is unknown. So Jughead moments shown could be in the past, present, or even the future in relation to the final scene of the third season. For those in need of a refresher, Season 3 concluded with a flash forward scene showing Veronica, Betty, and Archie bloody, standing in front of a fire in their underwear in the woods. Jughead was nowhere to be seen.

In the ominous scene, Betty told her two other friends, "We have to burn all of our clothes, including Jughead's beanie." Not the beanie! Betty continued, somewhat detached, "We'll wash off the blood in the swimming hole. After tonight, we never speak of this — ever. Not to each other. Not to our parents. No one. We finish our senior year. We graduate and we'll go our separate ways. That is the only way we won't get caught."

The Season 4 promo opens with the town looking for a missing Jughead in the woods. Betty, Veronica, Archie, Kevin, and FP, among others, are shown yelling, "Jughead!" Then, to make matters worse, the teaser ends with what appears to be Jughead in a coffin trying to escape. He even yells, "Let me out!" and "Help!" Again, it's unclear when any of the previously mentioned happens in relation to Jughead's burned beanie.

As for Jughead's Riverdale status, the cast spoke with TVLine at Comic-Con 2019 and made an interesting reveal about Cole Sprouse's absence from Season 3's final scene. "The only reason why that happened was because Cole was cold that night," KJ Apa dished. No, he wasn't joking, as Lili Reinhart added, "It literally was scripted with all four of us, and he was like, 'I don’t want to do it.'"

Who knows what's really ahead for Jughead, but according to an interview Riverdale executive producer Roberto Aguirre-Sacasa did with TVLine in May, fans should be "very worried" for Jughead come Season 4.

It's also important to note that Jughead is going to prep school this season, so he won't be seen walking the school hallways with Betty or his friends. Sprouse told Entertainment Tonight in July, "Jughead goes to prep school in this season. He's only back in Riverdale on the weekends." If you're worried about the Bughead distance, Sprouse told ET, "I think that is going to inevitably put stress on the relationship between Betty and Jughead." He continued, "I think it might be a little bit tense. They might fall, turn away from each other, only to come back together way stronger. I think they're gonna be really good."

Based on the Season 4 promo, it sure looks like Bughead is going strong. They share quite the steamy moment, just like Archie and Veronica. All that said, between the Season 3 finale and the new trailer, it appears Jughead is going to have a rough season. Let's just keep those fingers crossed nothing horrible happens to Jughead, you know, like him dying — and that he never gets a new beanie.