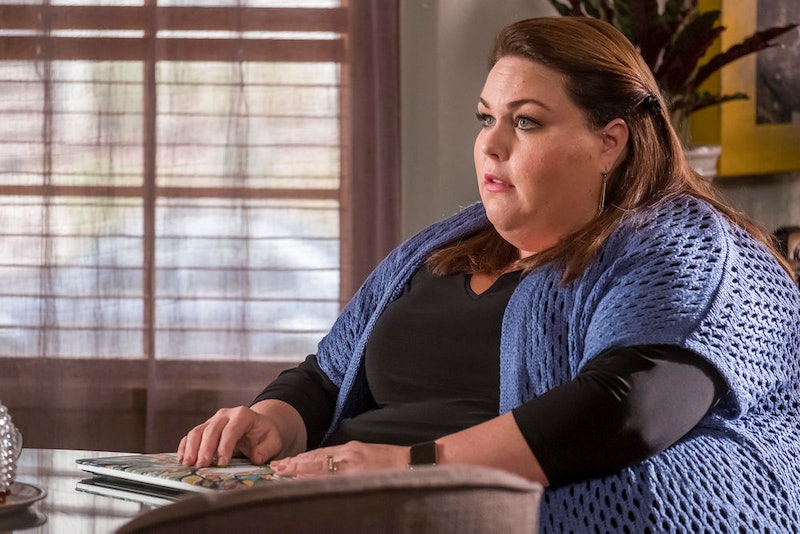 Kate and Toby's journey toward parenthood on This Is Us has had countless ups and downs. They struggled to conceive, then endured a miscarriage, and eventually found success with IVF. Things have been looking up — they've cut a gender reveal cake and even started planning for a nursery. But in the latest trailer for This Is Us, Kate's pregnancy is called into question yet again.

The trailer, which you can watch below, shows Kate as she's wheeled into the hospital on a gurney, presumably after arriving in an ambulance. Toby is waiting for her, and she looks scared, to say the least. There are no details on why exactly she's at the hospital — though it's definitely an emergency situation more than it is a planned appointment — and some viewers have speculated the worst.

It feels unlikely that This Is Us will kill one of the Big Three, though it's certainly possible. Kate's story has so much left to give, and though we haven't seen her in any of the flashforwards that have featured Randall, Toby and Beth as older versions of themselves, I think it's too soon to say that this hospital visit is where she'll meet her demise.

The development could spell trouble for her and Toby's future child, though. In an Entertainment Weekly interview published late last year, Chrissy Metz teased that Toby and Kate would be faced with a situation that sounds dire. "Toby and Kate are going to have a bit of an unconventional parenting situation," Metz said. "Not unconventional in that people aren’t doing it, but not what I think either of them ever had in mind."

She added that whatever the mysterious situation is, it'll be challenging for her, specifically, to play. “It’s going to be challenging for me as an actress, which I’m excited about — scared but excited,” she said. “It’s something I don’t think we’ve ever seen, at least not on network television.”

This seems, as many This Is Us clues do, like cause for concern! Tonight's hospital visit might be the beginning of this mysterious plotline, and fans are already debating what Toby and Kate's parenting situation might turn out to be. Some think that perhaps their child might have a disability, or even that they might have to choose between Kate's life or the baby's, and she'll sacrifice herself.

Parents overcome so much to raise happy children with disabilities all the time, and Kate and Toby's nurturing skills would certainly be put to the test in that kind of narrative. But that second idea — of a "save the mom or the baby" situation — would be uncharted territory even for a notoriously emotional show like This Is Us. That kind of decision-making and loss is real for many families, and featuring it would no doubt spark a passionate conversation about women's health. It'd be a huge subject for the show to tackle, but if handled delicately, might prove poignant.

There are other possibilities — perhaps this hospital visit, like many other misleading details on This Is Us, is just another red herring. Maybe Kate will leave the hospital completely fine, with pregnancy unscathed, and the parenting issues will come later. Maybe it'll be a problem, but a manageable one that they move on from. Or maybe, the show pulls the rug out from under us and does something wildly unexpected. We never know where things are going on This Is Us, so all there is to do now is just sit back and watch.