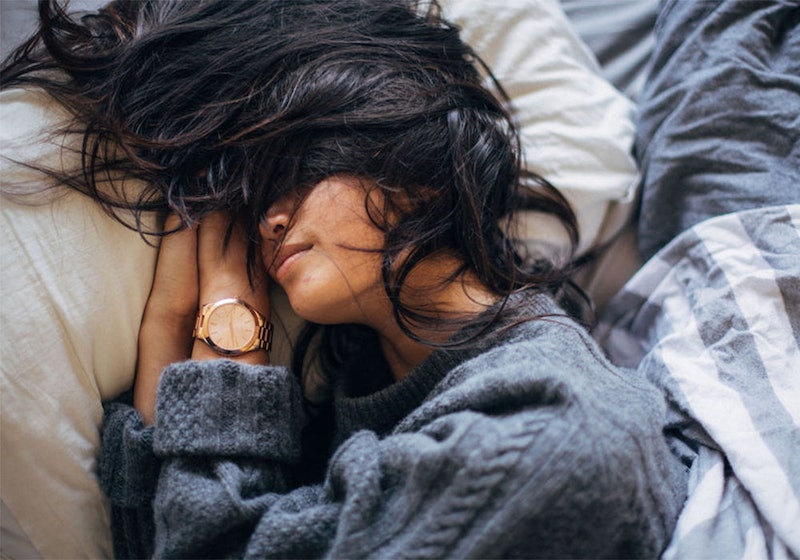 I don’t know about you, but if I don’t get a full eight hours of sleep then I’m crabby AF all day. Things that are already a struggle — commuting, a stressful day at work, and other people — become that much more difficult to deal with. I’m not the kind of person to blow up in someone else’s face, but even I’m not immune to a curt snap or passive aggressive glare when I’m feeling tired. So, does lack of sleep make you angrier? I’ve always had a gut feeling it does, but there’s now some actual science to back it all up. And to that I say, any excuse to get more sleep is A-OK in my book.

As reported by Marie Claire Australia, a recent study at Iowa State university revealed that even just a small loss of sleep made people much angrier. They reported that the experiment looked at two groups of people, one which had a "7 hours a night sleep routine" and others who “had their sleep cut short by two hours every night.” After that, they were subjected to my idea of personal hell: they were told to “rate different products while listening to [an] irritating noise”.

TBH when you’re trying to focus with an annoying noise in the background, that’s enough to make anybody angry. (As somebody who once had to write an article with a broken fire alarm going off every five minutes, not even a full night’s sleep could have kept me from tearing that thing out of the ceiling.) It turns out that’s exactly what the experiment hoped for and Marie Claire Australia reported that those with less sleep were “more likely to fly off the handle.”

Zlatan Krizan, the professor behind the project, said:

There was also another study by Tel Aviv University and the Tel Aviv Sourasky Medical Center, which revealed that people were more likely to lose their ability to control their emotions if they were sleep-deprived. Ergo, emotions like anger were quicker to surface. According to Huffington Post, the experiment took two groups of people: one who were well-rested and another set who had been awake for 24 hours. Following that, they were then asked to memorise a set of numbers set on top of distracting and neutral images while researchers tracked their brain activity.

Huffington Post explained that the aim of the project was “to create a need for subjects to regulate their emotional response to the distracting images in order to complete the task”.

They looked at both groups’ brain activity in the amygdala, “the area of the brain that processes emotion”, and those with less sleep had a much stronger emotional response to the distracting images than those who didn’t.

Given that I only had five hours of sleep last night, writing about all of this is kind of making me angry TBH. I’m not going to lie, I’m tempted to take a sneaky midday nap.