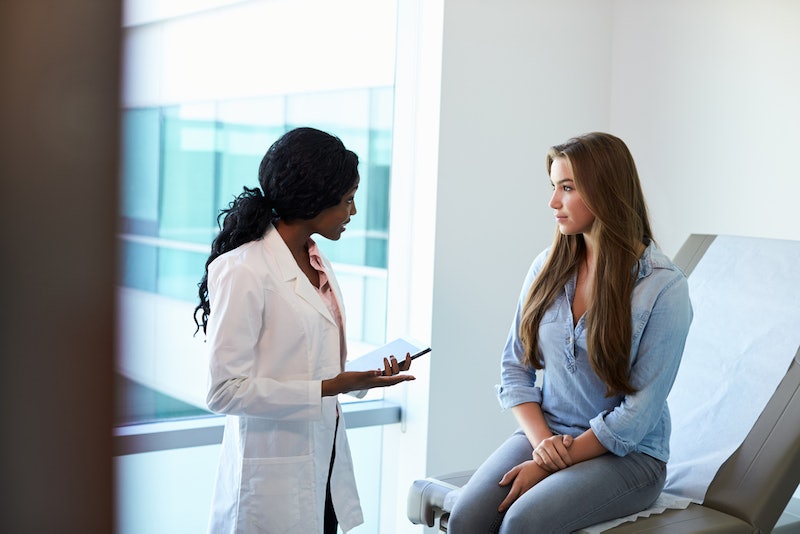 When I started to experience frequent urination, nighttime urination, and bladder pain and burning, I explored what seemed like every possibility. It was several months before a doctor thought to look into Lyme disease. But after receiving a Lyme diagnosis, I met many people in support groups who also had bladder symptoms from Lyme, and doctors seem to be noticing this connection as well.

Bladder symptoms like urgency, frequency, pain, and incontinence often receive the label of interstitial cystitis (IC), a catch-all term for chronic bladder inflammation. While it sometimes is designated by bladder lesions on a test called a cystoscopy, IC can stem from many sources, and the diagnosis is often given when it’s unclear where the bladder problems are coming from, as it was with me.

“I always found a number of my [Lyme] patients had been having IC issues,” internist, epidemiologist, and Lyme expert Daniel Cameron, MD, MPH, tells Bustle. “I would send them to urologists or gynecologists, but it would clear up when I treated the Lyme disease.” These patients of Dr. Cameron’s usually have normal cystoscopies and normal results on standard urine cultures (though urine cultures miss many UTIs).

Borrelia burgdorferi, the bacteria species that causes Lyme, likes to hide out in collagen, which is present in the bladder, Bill Rawls, MD, an integrative health expert on Lyme disease and other chronic illnesses, tells Bustle. Lyme co-infections like mycoplasma and ureaplasma also may end up in the bladder because they’re drawn to linings, he adds. Dr. Rawls believes that even when it’s not coming from Lyme and co-infections, interstitial cystitis may stem from microbes in the bladder that are not detected by typical UTI tests.

However, there hasn’t been much research yet investigating the link between Lyme and bladder symptoms. One study in European Urology from two decades ago failed to find a correlation between IC and the presence of Borrelia burgdorferi antibodies, but Dr. Cameron believes this study “relied too much on one single blood test,” as blood tests often miss Lyme infections. An animal study in the Central European Journal of Medicine that looked for Borrelia burgdorferi in rodents' bladders, hearts, and brains found that it was most likely to show up in the bladder.

For unclear reasons, Dr. Cameron often finds that his Lyme patients with bladder problems also tend to have stomach problems and/or postural orthostatic tachycardia syndrome. It may be that all these issues are related to dysfunction of the autonomic nervous system, he says.

The good news is, Dr. Cameron finds that bladder symptoms tend to clear up with Lyme treatment. “It’s not that there’s some permanent damage to the bladder,” he says. Dr. Rawls, too, has seen patients with Lyme-related bladder issues get better, often with the help of antimicrobial herbs.

Because Lyme stems less from one particular pathogen and more from overall chronic immune dysfunction, Dr. Rawls says the key to treatment is strengthening the immune system. “We’re not going to eradicate the microbe from the body,” he explains. “The goal is restoring normal immune function so the immune system can do its job to reach a suppression-free state.”