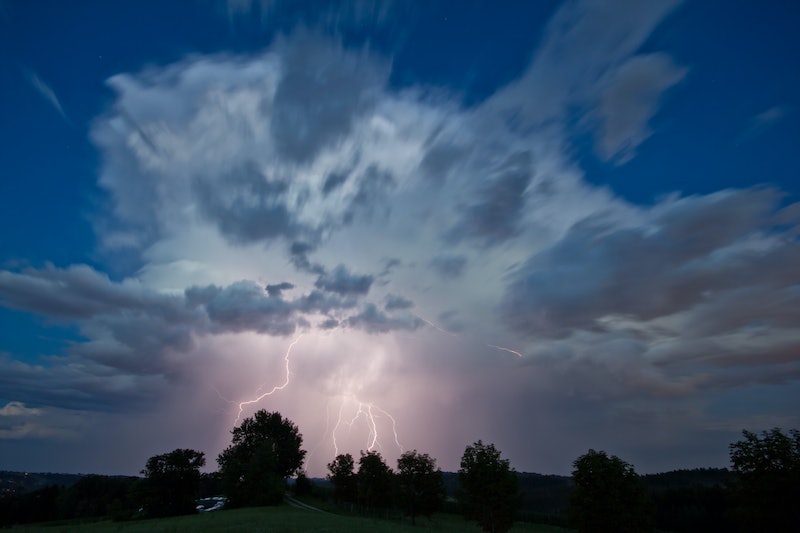 It's that time again. When, in terms of the ether, storms are low-key a-brewing. Any followers of astrology will know that, when Mercury is in retrograde, things might be a bit off kilter. Which is a totally acceptable reason to blame any multitude of sins on the astrological phenomenon. So, in the interest of the blame game, the question is: what else is affected by this tricky period in the astrological calendar? Like, does July's Mercury in retrograde affect the weather? Let's take a look.

I contacted the Met Office for their opinion on the matter and, TBH, science says no babes. According to the experts over at the Met Office, although the weather is affected by the sun and moon, other planets are not considered as variables when it comes to the weather. Which is low-key annoying because I thought this current fabulous weather seemed like a bit of a fringe benefit of the whole retrograde situation.

However, I also contacted astrologer Sally Kirkman who kindly gave her expert opinion on the matter. Kirkman believes the weather is most definitely sent haywire by Mercury being in retrograde.

"There are many examples of extreme weather conditions when Mercury is retrograde," Kirkman says. "This has a knock-on effect for all forms of transport ruled by Mercury and the God of trade. Roads are flooded or hidden under snow, airports are closed and some natural disasters create even worse conditions putting a stop to everything."

She also pointed to our current weather, which is seeing the temps hitting record highs. The astrologer states:

"More worryingly, Mercury turned retrograde in Leo this month, the fire sign ruled by the Sun and July 2019 could turn out to be the hottest month on record. Climate change is real and the extreme weather is only getting more extreme. As an astrologer, I believe we have to pay more attention to what’s happening with the planets (Gods) as their messages will only get louder."

Mercury has been in retrograde since July 7. Now, for those who are still not 100% clear of what exactly this whole retrograde thing actually means, don't worry, I got you.

So, according to NASA, it's basically to do with things appearing to be a bit backwards. As NASA's Star Child website states:

"Retrograde motion is an apparent change in the movement of the planet through the sky. It is not real in that the planet does not physically start moving backwards in its orbit. It just appears to do so because of the relative positions of the planet and Earth and how they are moving around the Sun."

With regards to astrology, Mercury is "the planet of communication." So, when things go the wrong way round, it really is enough to send everything off kilter. And, depending on who you believe here, it might be a good idea to bear that in mind when planning any weather-dependent events right now.

More like this
TikTok Has A Genius Old School Hack For Saving Money
By Sophie McEvoy
Ben & Jerry’s New Sundae Flavours Are A Chocoholic’s Dream
By Sophie McEvoy
What The UK Blocking Scotland’s Gender Recognition Bill Means
By Sam Ramsden
Here’s Your Daily Horoscope For January 27, 2023
By Mecca Woods
Get The Very Best Of Bustle/UK
Sign up for Bustle UK's twice-weekly newsletter, featuring the latest must-watch TV, moving personal stories, and expert advice on the hottest viral buys.