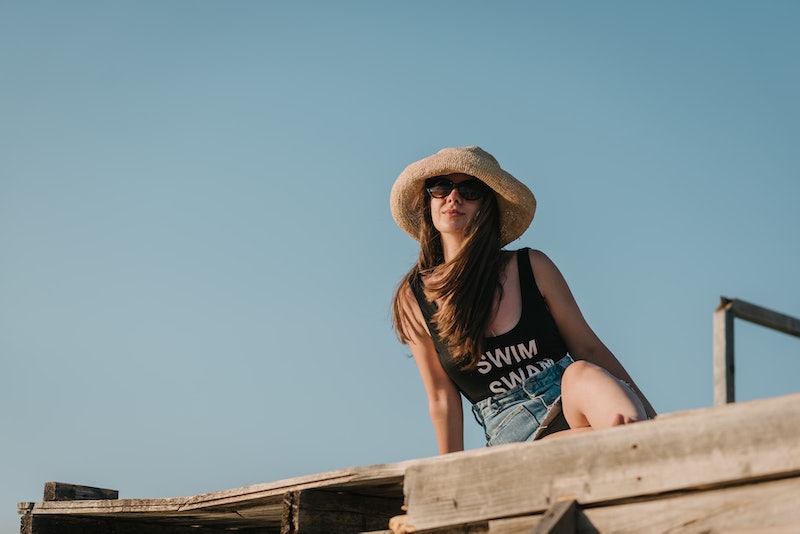 Feeling a little off? Well, if so, I'm not surprised, because Mercury retrograde summer 2019 began on Jul. 7, meaning we're already knee-deep in the planet's second (and much-dreaded) backspin of 2019. We'll be feeling the effects of the retrograde — in the form of miscommunications, botched schedules, tech glitches, and more — up through Jul. 31, when Mercury finally stations direct. And while every sign will feel the retrograding planet's slow-down-n'-reflect energy, today we're talking about Mercury retrograde summer 2019 predictions for Gemini specifically — because the sign of the twins is one of the zodiac signs that Mercury retrograde will affect most.

In astrology, Gemini is naturally ruled by Mercury — and this makes sense, if you think about a Gemini sun's qualities. Mercury rules over things like communication and intellect, both of which are a Gemini's steaming hot cup o' tea Not only is the sign of the twins known for being rather mercurial in temperament (no pun intended!), they're also one of the most communication-centric signs of the zodiac. As an air sign, Gemini is very much intellectual and conceptual at heart. They tend to be highly curious about the world, fascinating and witty conversationalists, and quick thinkers. They love to chat (and yes, sometimes gossip), and their brains go at a mile a minute pace. That said, when their ruler Mercury goes retrograde, you can guarantee they're going to feel the influence pretty heavily — and it can be frustrating.

Bustle chatted with astrologer Lisa Stardust (who also happens to be one of my favorite Gemini suns!) about what the zodiac's twins have in store during this transit. "Mercury is the ruler of Gemini, so therefore we can expect trouble and a mixing of energies during the retrograde," she explains. While this summer's Mercury Rx isn't shaping up to give Gemini suns the smoothest ride of their lives, with a lil' self-care and awareness, they can ride the waves and make the retrograde's chaotic energy work for them.

Given that this particular Mercury retrograde is passing through Leo and Cancer, it'll be hitting certain areas of Gemini's chart and bringing up some major themes. "The messenger planet embarks on a three-week reversal through Leo and your communication house (and then back into your financial sector)," wrote astrologers Ophira and Tali Edut of Gemini's experience with this summer's Mercury Rx in The AstroTwins' 2019 Horoscope. Ugh, as if communication during a Mercury backspin wasn't already a mess, you might be running into crossed wires even harder, Gemini — as your ruling planet is retrograding through your third house.

You'll also want to look out for yourself in terms of money, as the retrograde will pass through your communication area and end up right in your finance house — so think before you buy, sell, trade, or make a final decision on anything. "Don't sign contracts, hold out for more time, and if someone's pressuring you, consider that a possible red flag," continued the AstroTwins. "Stall until you're ready to talk terms... if you even get to that point."

Let's get down to the nitty-gritty and explore exact what astrology has in store for you during your ruling planet's retrograde, Gemini. Check it out.

Embrace The Slowed-Down Retrograde Energy (In Other Words: Be Patient!)

Patience isn't exactly a Gemini's strength — not because they're naturally impatient, exactly, but rather because they tend to move so quick and expect the rest of the world to keep up. "Gemini works at the speed of two — because there are two people in the constellation (the twins)," explains Stardust. "But, during the retrograde they may not be able to work at the fast lightning pace they are used to, which may cause frustrations to rise." Understand that it's virtually impossible to multi-task the way you normally do under this transit, Gemini. Retrogrades are about slowing down and reviewing, so clear your schedule and allow yourself the extra time.

This summer's Mercury retrograde happened to start in midst of eclipse season, and the full moon and lunar eclipse in Capricorn falls smack in the middle of the retrograde. That said, the destiny-related energy of the eclipses will be influencing your Rx experience — especially "[The Jul. 16 eclipse lands] in Capricorn and your eight house of merging, intimacy and shared resources, putting the spotlight on your closest ties and how you meld your superpowers," wrote the AstroTwins. "From pooling your funds to working the barter system, these eclipse reveal new ways you can thrive cooperatively."

Steer Clear Of Gossip — Cause It Can Get You In Trouble

You're a smooth talker, Gem, but during this Mercury retrograde, it's going to best best to keep other people's business out of your conversations. "Ruled by trickster Mercury, this retrograde will have major affects on you," warns Stardust in an interview with Bustle. "[Y]ou will be lost in a sea of gossip and drama." The likelihood for miscommunications during any Mercury Rx is high — but this summer's retrograde in particular is hitting your communication house, so you'll need to be extra cautious about unintentionally involving yourself with crazy drama.

Look Out For Extra Money, Honey

While you'll want to be particularly smart and guarded with money during this retrograde, you can also look forward to a potential boon in the form of a returned loan or valuable favor. "[Geminis] may receive a payback on a loan they lent someone or a lucrative payback from helping another out in the recent past," shares Stardust. While retrogrades are often a time when it's easier to lose things, sometimes it can go full circle and bring the lost things back to you instead.

Listen To Your Body & Let Yourself Rest

You're like a hummingbird, Gem: You never stop fluttering your wings, and you can move faster than the blink of an eye if you feel like it. But given Mercury's influence over you (plus the powerful but draining energy of the concurrent eclipses), you're likely to be feeling super drained — and you'll want to honor that! "Gemini may become extra exhausted and depleted of energy, preferring to lounge in bed instead of hitting the party scene," explains Stardust. Don't be afraid to decline a few invites or say no to a few projects in favor of giving yourself a lil' extra R&R. Your body, mind, and spirit will thank you.