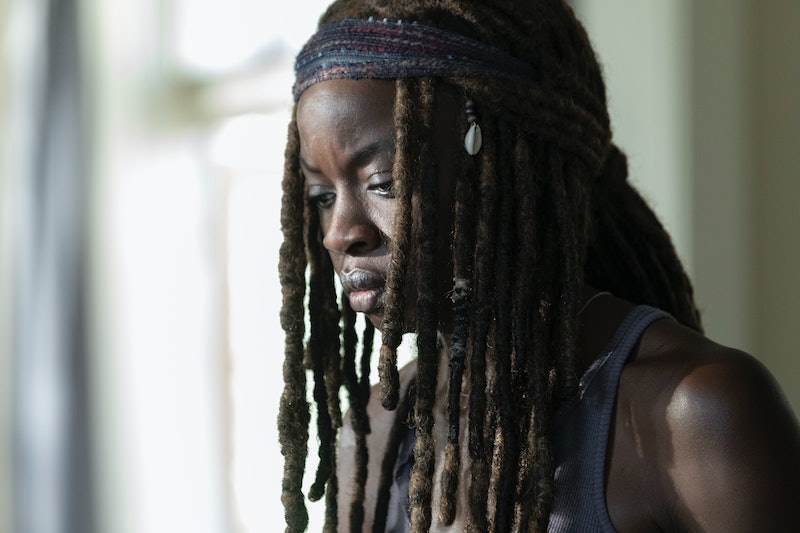 Rick Grimes' time is up on The Walking Dead, and when he leaves (however he leaves) it's going to affect every character in different ways. Will Michonne leave the group on The Walking Dead? What's going to become of Rick's family once Andrew Lincoln leaves the AMC series? In the comics, around this point in the story, Michonne is a key leader in the Whisperer War and is in a relationship with King Ezekiel. Remember that Carol, who is involved with Ezekiel on the AMC series, is not in the comics. However, the romance comes to a tragic end when the King is killed by the Whisperers and his head put on a pike.

Michonne also finds her teenage daughter, Elodie, a little past this point in the graphic novel. Elodie had gone missing, and ended up at a community in Ohio called the Commonwealth. (On the AMC series, Michonne has adopted Judith as her daughter.) After some deliberation, Michonne decides to stay with her daughter in Ohio.

Could something similar happen with Michonne next on the show? Could she and Judith be moving to another community to start quiet life together? They may feel the need to start over, far from Negan and all the drama. Maybe, if Rick doesn't leave The Walking Dead in a coffin, the whole family will be taking a road trip.

There is, of course, a lot more to Michonne's character than her relationship with Rick. It's just painful to imagine Michonne without him at this point. “There’s no replacing him,” actor Danai Gurira told EW Radio over the summer. “There’s no just getting over it.”

Their partnership is so loving, and genuine, and relaxed. “They went through a remarkably intense thing together,” said TWD chief content officer Scott Gimple about the connection between the "tight couple" in an interview with TVLine. "She was there for him in so many different ways, and the things she ultimately led him to do were so important.”

That said, it should be noted that in recent seasons Michonne has been taking on aspects of Andrea's storyline as well. It's Andrea that is married to Rick in the comics, and raising Judith with him. Unfortunately, Andrea dies during the Whisperer War, in a manner kind of similar to Carl's death on the show. Let's hope this isn't where her storyline is headed!

Speaking of Rick's son, one theory suggests that Michonne is taking on Carl's storyline from the comics — becoming Negan's confident from the other side of his cell. Another theory wonders if Michonne is pregnant on The Walking Dead. Honestly, anything can happen.

There's been no announcement about Gurira leaving The Walking Dead any time soon, so any speculation and theories are just that. Now a Marvel hero as well as a zombie killer and a Tony nominated playwright, Gurira's never had a problem balancing multiple high profile projects. Whatever happens to Michonne next, she'll be forever changed by the events of Rick Grimes' last episode, and we'll all have to hold our breath to see what it entails.