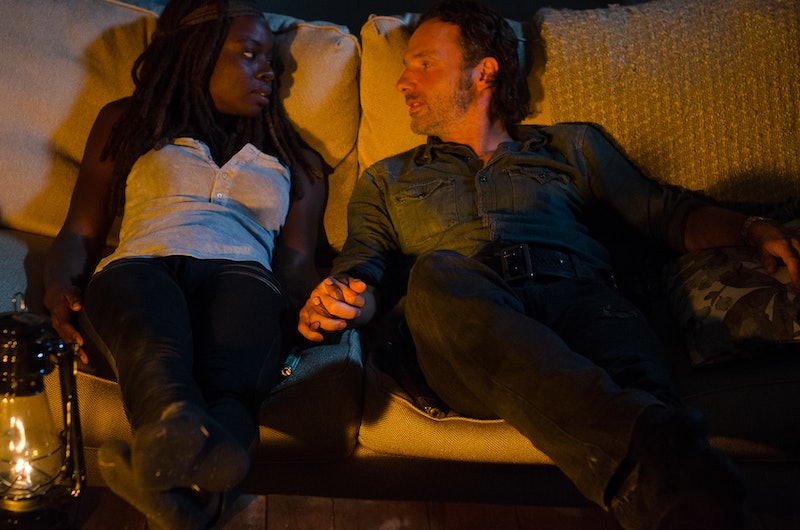 The minute Michonne showed up onscreen in her robe in front of Rick during the Sunday, Feb. 21 episode of The Walking Dead, I knew it was on. Then at the end of last week's The Walking Dead, Rick and Michonne hooked up, finally giving fans what they've been dying to see. Yet, if you're interested in how faithful the AMC series is sticking to the source material, you'll be surprised to learn what happens for these two romantically in the comics. Comic spoilers ahead. While the series has been building Rick and Michonne's relationship for a while, their comic book counterparts don't share the exact same path. And in The Walking Dead comics, Michonne actually has quite an interesting list of lovers during the zombie apocalypse.

Since Michonne has a fantastic, respectful relationship with Rick, their hook-up was a healthy expression of these two badasses' feelings for one another. And it doesn't hurt that Carl and Michonne are pretty much in a son-mom relationship as it is (sorry, Lori). But Rick and Michonne's domestic bliss on the show has not happened in the comic books. And though the Richonne sex scene (best 'ship name ever?) was a bit unexpected due to timing, — I mean, Jessie did just die in the previous episode — it fits the motives and desires for the TV versions of the characters.

While Michonne endured some horrific traumas in the comics that we have not seen on the series, she also had her fair share of romantic relationships. Here's who Michonne has hooked up with in the comics, which may include a few surprises for fans only familiar with the AMC series.

Michonne and Tyreese have an intense relationship in the comics books, with the pair having a sexual relationship and sharing a cell in the prison together. Many circumstances about their relationship are completely different from comic book to screen, but the biggest one is probably the fact that Michonne loved Tyreese before his death.

Yep, you read that right. In the comics, Michonne and Morgan get together. While that pairing completely wouldn't work on the TV show, comic book Michonne loved Morgan after Tyreese died. I use past tense in "loved" because though Morgan is currently alive and well on The Walking Dead, I can't say the same for his graphic novel counterpart.

The next character that Michonne hooked up with in the comics is a character not on the TV show as of now. His name is Ezekial and he's the leader of a community called The Kingdom. Not only does he go by the name King Ezekial, he also has a freakin' pet tiger. While the Michonne I know wouldn't date a man like that, she does in the comics.

Rick and Michonne are powerful allies in the comics and they haven't been together romantically, even though there have been slight hints that Michonne may have feelings for him. The pair has been strictly platonic in their badassery since Rick is too busy dating Andrea — gah, yes Andrea is still alive in the comics — to be in love with Michonne.

Although the scenario of Rick and Michonne as just friends may work for the Walking Dead graphic novel, I'm thrilled to see them together on the show — even if their bliss may not last all that long.