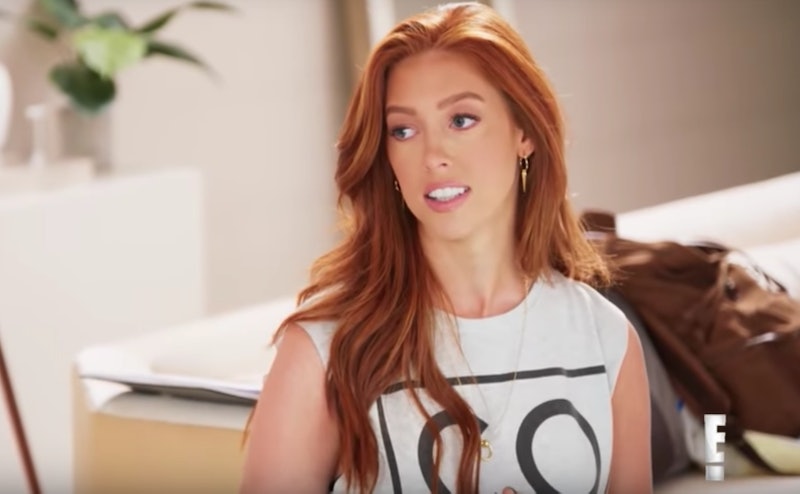 You may recall a particularly boisterous redhead who found herself in some drama during the first season of Very Cavallari. She was hired by Kristin Cavallari to run her jewelry business' social media accounts, and it quickly became evident that they didn't always see eye-to-eye. If you've watched the Season 2 trailer, you may have noticed that she's not in it and wondered: does Shannon Ford still work for Uncommon James, or did she and Kristin acknowledge their differences and part ways?

After Season 1 aired, Shannon announced on her social media that she is no longer working for Kristin or Uncommon James. Not long ago, she posed a Q&A on her Instagram story, and answered questions regarding her work there. One follower straight up asked if she still worked at UJ, and she gave an honest answer. "No!" she wrote. "But the new girls over social media are awesome!"

According to JoeRealNameNoGimmick on Reddit, Kristin posted about the job vacancy five months ago on her Instagram story, stating that she was looking for a new head of social media for her brand. Some people in the comments thought she could've let Shannon go because of their conflicts and her inconsistent work ethic.

The next natural curiosity questions whether or not Shannon is still friends with her former co-workers. Thankfully, another follower of hers asked that question, too. "I love the babygurrlls I met while working at UJ alwayz," she wrote. Hopefully that means she's still on good terms with Kristin, too.

Of course, the answer to those questions explains why Shannon doesn't appear in the Season 2 trailer, but it also leads to even more curiosity about what she's doing now. Thankfully, another dedicated fan of hers decided to find out. "Where are you working now?" someone wrote. Shannon answered: "For myself."

What exactly does she mean by that? It means many things. Before appearing on Very Cavallari, she already had a significant social media following thanks to her modeling, and the show caused it to grow even larger. She captured her audience and got them to stay with her witty sarcasm and brutal honesty. Now, she uses the page to promote her own merchandise as well as sponsored content, and it's working out well for her. She recently sold out of her own line of custom pop sockets that displayed funny sayings like, "Send Noods," and "Stop Talking." Then, she moved onto hats — the first order sold out, but you can still pre-order them on her website. She's not shy about her love of tequila, so naturally, the hats read "tequila helps."

After gaining exposure on TV, many reality stars continue to make a living on product promotion and affiliate programs via social media, for which they're often highly criticized. After all, most of their new followers want to see their real lives, not ads for vitamins or detox tea. Shannon does occasionally post advertisements in partnership with brands, but she promised her followers that they're all genuine and authentic, and that she would never promote a good or service she didn't believe in. "Just out here tryna hustle and make some dough," she wrote.

When she's not posting to Instagram, she's either making hilarious YouTube videos or modeling. She's still a client of The Block Agency's in Nashville, which is how she met Kristin in the first place, according to an interview she did with reality podcast Make Speidi Famous Again.

Content controversies aside, you really should follow Shannon on Instagram for a good laugh every once and a while. Her brutal honesty and transparency about the non-glamorous parts of her life is definitely a dose of much needed refreshment in an over-edited feed. And now that she's not on Very Cavallari, it's your only opportunity to stay tuned for what she's up to next.

More like this
18 Unanswered Questions From 'The Hills' That Still Haunt Us Today
By Ivana Rihter
Jill Zarin Said Her 2011 RHONY Firing “Felt Like A Death”
By Brad Witter
Taylor Armstrong Would “Definitely” Return To RHOBH After Her Season 3 Exit
By Brad Witter
Which RHODubai Housewife Has The Biggest Net Worth?
By Hugh McIntyre
Get Even More From Bustle — Sign Up For The Newsletter