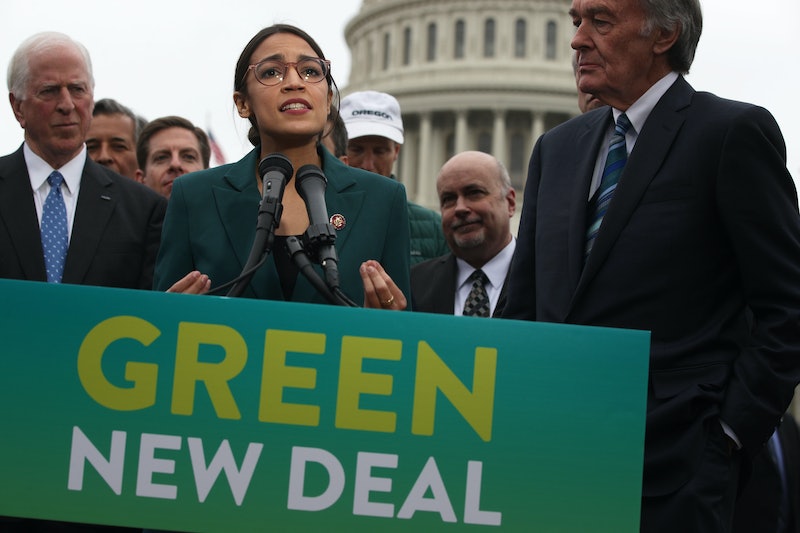 Since Alexandria Ocasio-Cortez first introduced it, the Green New Deal has drawn interest from skeptics, critics, supporters, and more. The proposal, which seeks to aggressively combat climate change while also addressing economic inequality, does offer a number of progressive solutions for its goals. So if you're wondering whether the Green New Deal eliminates air travel, don't worry too much.

Within the official outline for the Green New Deal, which was released on Feb. 7, the 10-year goal to move America towards 100% renewable energy is explained in detail. And yes, one of those details is the reduction of air travel — but the outline doesn't exactly say it wants to get of air travel. Rather, it outlines a plan to reach a point where air travel "stops becoming necessary" as a means of transportation, and it aims to achieve this in a number of ways.

The outline reads in part,

At another point in the outline, the authors explain that the 10-year goal aims for "net zero" emissions, rather than "zero" emissions, because "we aren’t sure that we’ll be able to fully get rid of farting cows and airplanes that fast."

What's more, at still another point in the outline, the authors explain why such drastic steps are needed for industries as valuable as the transportation industry: "Simply put, we don’t need to just stop doing some things we are doing (like using fossil fuels for energy needs); we also need to start doing new things (like overhauling whole industries or retrofitting all buildings to be energy efficient)."

It's not surprising, necessarily, that a climate change proposal would address air travel: transportation is the largest source of greenhouse gas emissions in the nation, according to a report by the Rhodium Group as released by Vox. Vox further noted that a full re-haul of the rail system in the United States wouldn't be that unheard of, given that many countries offer extensive high-speed train offerings instead of flights, in countries like Japan, South Korea, and Italy, where trains travel as fast as 200 miles per hour.

Vox also reports that shifting transportation needs from airplanes to trains will definitely decrease greenhouse gas emissions in a dramatic way — but only if those high-speed trains run on electricity, not on coal power.

To the publication, Yonah Freemark, a doctoral candidate studying the politics of transportation at MIT, said, “Outside of the US, Canada, and Australia, every developed country has invested quite considerably in high-speed rail transportation systems."

He added, "I think there is no reason to think that the United States is any different [in its transportation potential] than any other country.”

As of Feb. 12, five presidential candidates have cosponsored the New Green Deal.