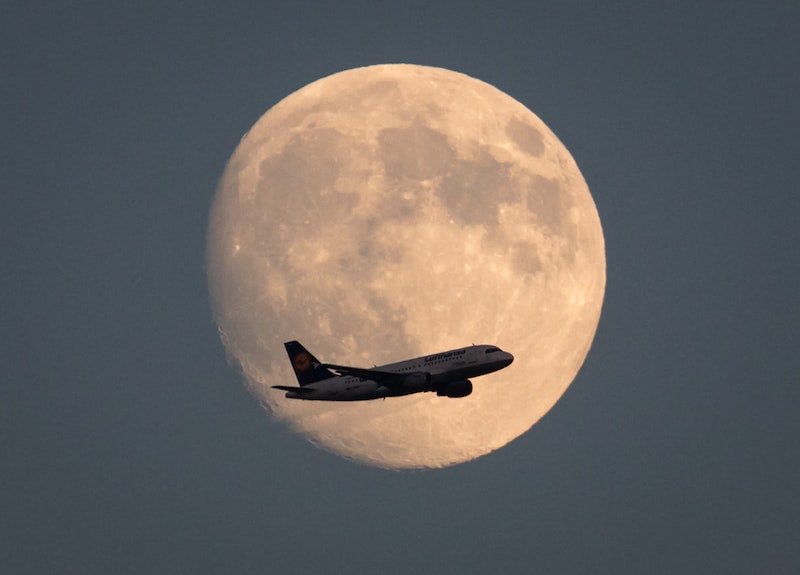 If you're not an astronomer, chances are you're a bit confused about the Harvest Moon. Like, what exactly is it? And, does the Harvest Moon happen every year? Also, why is it so special? Don't worry, it's not you — this moon is a confusing one, and has a lot of factors. But I'm going to break it down for you.

First of all, the term "Harvest Moon" is just a nickname given to the first full moon to occur after the autumnal equinox (Sept. 22), and more often than not occurs in September rather than October — this year, in 2017, it just so happened that the Oct. 5 full moon was closer to the autumnal equinox, so that's why it's occurring on a different date than last year. The name was given to the moon by the Algonquin tribes and the early Northern and Eastern American farmers in the pre-Gregorian or Julian calendar days. Back then, people had to rely on lunar activity to keep track of time. Just after the autumnal equinox was the perfect time for farmers to gather their crops. By the beginning of fall, their grains were ready to collect, their fruits and vegetables were ready to pick, and they could get to their crops before the animals did. So, quite literally, the Harvest Moon was just a reminder to harvest.

But because the Harvest Moon is based off of a lunar calendar, (which is approximately 29.5 days, give or take a bit) it doesn't always occur during the same month each year. And just as a refresher: a full moon occurs when the Earth is directly aligned between the Sun and the Moon, leaving it unencumbered, bright and "full."

Technically speaking, the Harvest Moon can happen on any date between Sept. 7 and Oct. 8, which according to National Geographic, means the probability of an October Harvest Moon is about one in four.

But really it doesn't matter much which month the Harvest Moon falls in. Literally all of the fall's full moons are stunning. Because the moon's orbital path is tilted in respect to our planet's orbit, it appears to change its place in the sky every time it rises. During the year, the moon rises approximately 50 minutes later each day, but both before and after the autumn equinox, the moon rises only 30 minutes later each day, meaning it appears much brighter than usual. Again, this is why farmer's relied on the autumnal full moons for working light.

Also, because of this timing, the moon is rising just as the sun is setting, so it can sometimes appear orange or tinted. Essentially, you're going to want to head outside at twilight for the next few days, because you won't want to miss this sight.

And also — not to be a Debbie Downer — but it won't be long before the clocks are turned back (Nov. 5, mark your calendars), the days are shorter, the nights are longer, and it's no fun/too cold to be outside anymore. So, make the most of it and get out there and enjoy the semi-rare, but totally awesome October Harvest Moon.