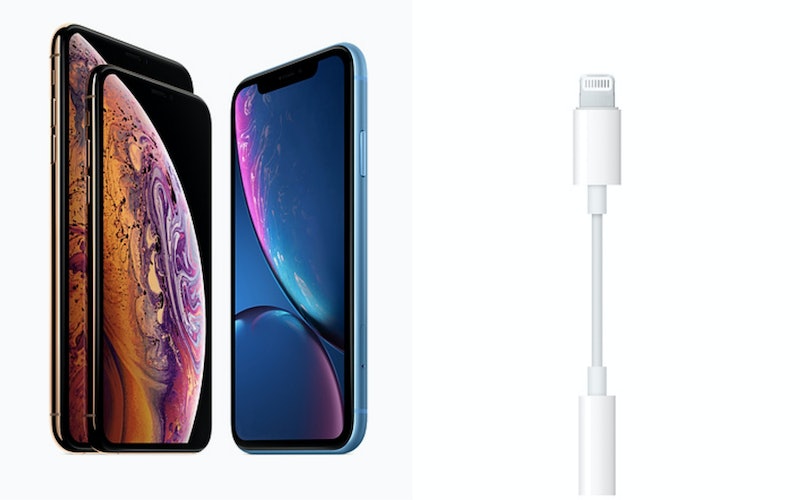 By now we're all so used to seeing people commute with their AirPods in ear that it is relatively unsurprising to people that new iPhone models come without headphone jacks. In the Apple Keynote live-streamed on Sept. 12, Apple announced three new iPhone models — the iPhone Xs, iPhone Xs Max, and iPhone XR — to its lineup, prompting many to wonder: does the iPhone Xs have a headphone jack? While it was clear with the introduction of the new iPhones that none of them would come equipped with one, Apple users have also noted that Apple will no longer be providing the headphone adapter dongles that it once provided with the purchase of an iPhone X.

The exclusion of headphone jacks in new iPhone models has been a point of discussion since September 2016, when Apple first introduced the AirPods — wireless, detached headphones that operate via Bluetooth — and announced that the iPhone 7 would be made without the headphone jack. Subsequent models (the iPhone 8, iPhone 8 Plus, iPhone X, and Apple's newest iterations of it announced this week) were made in a similar fashion, but up until now, Apple has provided an adapter dongle with the purchase of a new iPhone, allowing users to use their traditional wired headphones to listen to sound. According to 9 to 5 Mac, the new packs sent with the iPhone Xs, iPhone Xs Max, and iPhone XR will not provide an adapter.

That being said, the adapter dongle will still work on these newer phones — they just will have to be purchased separately. The adapter dongle costs $9 on Apple, and as also noted by 9 to 5 Mac, is Apple's top-selling product at Best Buy for the past two years, as well as the number one revenue generator for Apple. Also worth noting, the iPhone Xs will come with EarPods with a Lightning Connector (as well as a Lightning to USB Cable and 5W USB Power Adapter); details about the iPhone Xs and its contents are already on Apple's website, along with information about the iPhone Xs Max and iPhone XR.

Notably, Apple is also doing away with the last of its models that have a headphone jack; it announced that it is discontinuing the iPhone SE and the iPhone 6, the last model of iPhone to come with a headphone jack installed, according to The Verge. In addition, Apple will no longer sell the iPhone X, now that the newer models are about to hit the market.

If you're looking into purchasing any of the new models, make sure you're ready to rumble for that preorder — you can sign up for the iPhone Xs and iPhone Xs Max on Friday, Sept. 14, with the phones shipping out on Friday, Sept. 21; the iPhone XR will be available for preorder Friday, Oct. 19 to ship out on Friday, Oct. 21. If you're unsure which model is best for you, you can check out the differences between iPhones.

More like this
15 Years Of The iPhone, In Pictures
By Emma Carey
Poshmark Vs. Depop: How The Reselling Apps Compare
By Emma Carey
5 Differences Between YouTube Shorts & TikTok
By Emma Carey
How to Delete (or Pause) Your Hinge Account
By Emma Carey
Get Even More From Bustle — Sign Up For The Newsletter