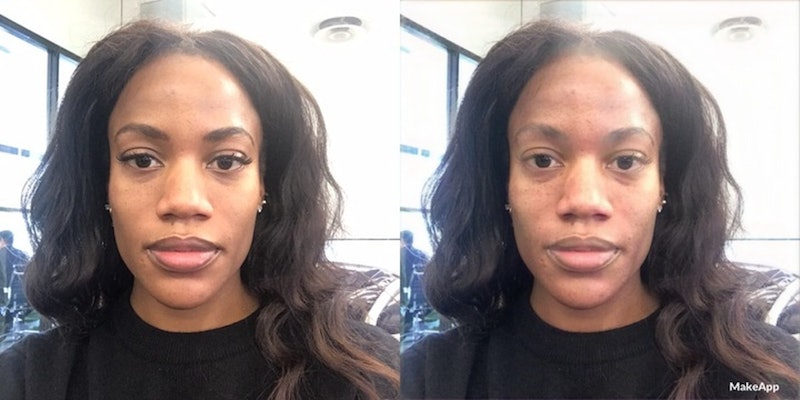 Men, allow me to introduce myself. I am an unapologetic trickster. That’s right. I wear makeup on the regular, which apparently makes me a woman solely interested in duping you into thinking I’m attractive. But when the makeup wipes come out and the cosmetics come off, you are going to see the real, horrific me. Don’t believe me? Just run my face through MakeApp to unveil the terror.

The now infamous MakeApp was created by a man (of course) who is seemingly obsessed with stripping makeup off unsuspecting women’s faces. Though this app also can add makeup to a person’s face, the makeup removal feature is seemingly why the app was created. And the fresh-faced feature is receiving a lot of backlash, as it should.

Since the dawn of time, men have been obsessed with why women wear makeup — and what they are "hiding" underneath it all. Forget makeup as a creative outlet or as self-care. Men know the true reason behind this cosmetic curiosity is that women are simply out to trick them. Clearly, because all of women's hobbies must center around men. Well, there's now MakeApp to help these poor, helpless men reveal the woman behind the makeup mask.

The only problem — you know, aside from blatant misogyny — is that the app is incredibly inaccurate. Just take my before and after for instance:

The app aged me about 20 years or more. It also looks like I've been sobbing for the same amount of time, given my blotchy, red appearance. I hate to break it to you, men, but my bare face is going to just have to remain a mystery. This is definitely not what I look like without makeup.

Let's also note how the app actually aged the ground behind me! That definitely happened, proving nothing is safe from MakeApp.

To further delve into the app, I asked some Bustle editors to give the problematic app a try. Here are their photos and reactions. The most common sentiment? This is bullshit.

"I'm not sure why it made my skin purple, and I definitely don't have skin peeling off my forehead IRL as this photo implies."

"I hate this makeup remover app. It makes me want to find the creator and ask him what women ever did to make him such a rude person."

“This is bullshit. I’m literally not wearing makeup in this photo, and I’m actually sick. Somehow I look sicker after MakeApp.”

"This looks even worse than my actual skin. I have acne scars, but not like that."

"I should note, I'm not actually wearing any makeup in the original photo. Though I'm sure the app could be fun to mess around with when you're wearing really dramatic makeup, its potential as a tool for bullying (i.e. someone taking a photo, running it through, and saying 'Here's what you REALLY look like!' in an attempt to shame) is what really made an impression on me."

And indeed it is bullshit. Everyone who tested the app concluded that the AI makeup remover made them appear blotchier, redder, and sicker than they actually look sans cosmetics.

The most important thing to remember when confronted with MakeApp's unfortunate existence is that no woman ever owes you a look at their face without makeup. Especially if you are looking to shame them depending on the results.

But if you really care that much, dudes, here's what I really look like without makeup.

And you didn't even need an invasive, sexist app for me to show you.