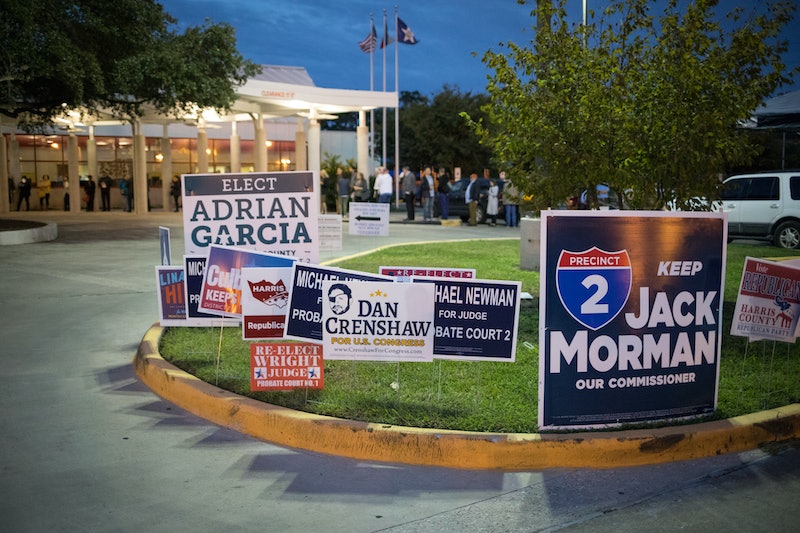 Domestic election observers have been present at American elections for various purposes since the 19th century, when the country adopted secret ballots, The Washington Post wrote. And since 2002, international election observers have also come to the U.S. to monitor American elections. The first invitation to the Organization for Security and Co-operation in Europe (OSCE) international monitoring group came in 2002, according to the Post, in reaction to the problems surrounding the 2000 election in Florida.

Now, the OSCE has monitored every American general election since 2002, and the group's delegation for the 2018 midterms arrived in the U.S. in early October. The OSCE, according to their website, acts in a strictly observatory role, and it does not ever attempt to influence the elections that it monitors. There is, however, a history of election observers in the U.S. attempting to influence the outcome of elections — but they're not the international observers.

Both Republicans and Democrats can send their own partisan election monitors to polling places, according to the National Conference of State Legislatures (NCSL). The purpose of these observers, often called poll watchers or poll challengers, is to protect their own party's interest at the voting location. According to The Washington Post, however, poll watchers — on the Republican side in particular — have occasionally resorted to what amounts to voter intimidation.

This is a salient problem even now, as Trump actively called for poll watchers to "prevent voter fraud" in 2016, as Salon reported at the time. Unlike voter intimidation, however, voter fraud is "astonishingly rare" in the U.S., as the Brennan Center for Justice wrote in 2017. In an opinion piece for CNN that mostly praised the U.S. long commitment to strongly democratic elections, OSCE election monitor Christine Muttonen also issued a warning about the misplaced focus on voter fraud prior to the 2016 election.

"Casual allegations [of voter fraud] can have a dangerous effect, creating an atmosphere of tension and mistrust," Muttonen wrote.

The purpose of other, non-partisan observers — whether international or domestic — is just to see that democracy is functioning smoothly, though, as the NCSL explained. While international organizations like OSCE are just there to monitor elections, The Washington Post explained that domestic observers from various NGOs can actually look for voting issues in real time, alert their respective organizations, and try to have the local election commissions get the problems in order.

It's important to note that there's nothing abnormal about the presence of election observers, either from at home or abroad, despite what you may have heard. In 2013, for example, Texas Gov. Greg Abbott issued an open letter to OSCE, as Texas Monthly wrote at the time, claiming that the group's observers were "not allowed to influence or interfere" in the election in Texas and that "It may be a criminal offense" to come within 100 yards of a polling place. OSCE, by definition, does not come to elections to influence or interfere — and having election observers at American elections is just another way of confirming the country's dedication to democracy.