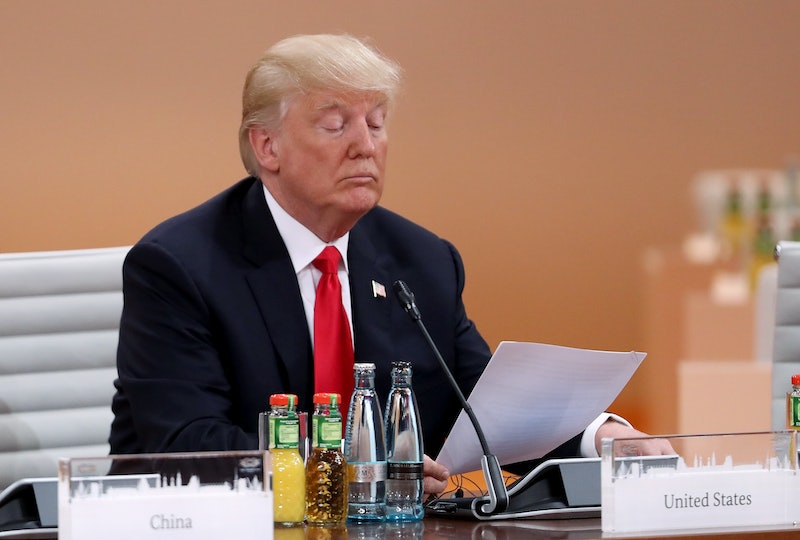 Ever since Donald Trump first entered American politics, conspiracy theories have been a large part of his identity. He gained popularity among conservatives when he latched on to the debunked claim that President Obama was not born in the United States, and he hasn't stopped since becoming president, with claims that 3 to 5 million people voted illegally in the 2016 election. But that may stop (or, at least, lessen), according to POLITICO, as Trump's staff tries to cut conspiracy theory websites from his reading list.

Trump's new chief of staff, John Kelly, is reportedly working to limit the information that the president sees. Part of that involves stopping random White House aides from sending him policy proposals or press releases from interest groups, as well as "news articles that haven't been vetted." This is a big change from the status quo; Trump reportedly received a folder of positive news about him from aides multiple times a day.

It's a testament to his unconventional presidency that stopping the president from seeing false or misleading information is seen as a big change. There were no reports about aides being worried that President Bush was reading articles about how he orchestrated 9/11, nor were there any concerns that articles about President Obama's "secret Muslim faith" would end up on his desk.

Keeping Trump away from this kind of information could also possibly lead to a break between the president and a certain segment of supporters on the far-right. Kelly's efforts will likely limit the president's media diet to a much more mainstream group of news organizations, and, according to a BuzzFeed report, many of the pro-Trump sites frequented by Trump's most die-hard supporters, like Gateway Pundit, Infowars, and Breitbart, see this as an attack on them from advisers to the president with a goal of weakening the president.

"I'm scared that the military complex is taking over the formerly populist White House," Lucian Wintrich, a reporter for Gateway Pundit, a pro-Trump outlet that has frequently pushed false or misleading stories, told BuzzFeed News.

Infowars, the site run by notorious conspiracy-peddler Alex Jones — who has said on his radio show that the Sandy Hook shooting was a hoax and had Trump on his show back in 2015 — ran an article on its site about this change.

The news will undoubtedly bolster complaints emanating from Trump's base that he has been isolated and surrounded by globalists who have no interest in furthering Trump's "America first" message.

It's unclear if Kelly will be successful in curbing the president's penchant for conspiracy theories. For the vast majority of Americans, though, it will likely be welcome news.