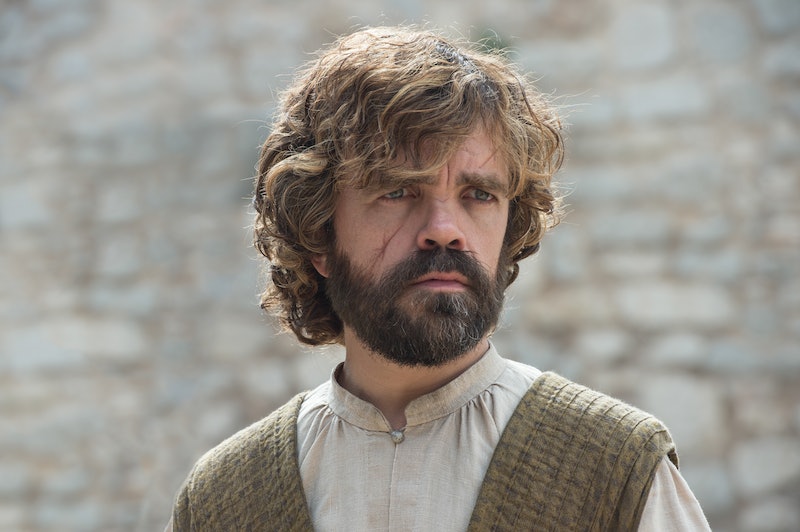 With every new series of Game of Thrones, I’m always pleasantly surprised when Tyrion Lannister somehow makes it to the end. The man has been accused of murder, had his face slashed open, made some terrible life decisions and some even worse friends, but somehow he’s always managed to come out on top. That said, everything could change next year when the final season of GoT arrives on screens. And the man behind the character, Peter Dinklage, has dropped some hints as to his fate. So, does Tyrion die in Game of Thrones? Based on the actor's recent comments, it could go either way and TBH I’m going to be sweating nervously till 2019.

While promoting his newest film My Dinner with Herve, Dinklage was interviewed by Entertainment Tonight and the topic of the landmark HBO show came up. Dinklage, who has played Tyrion on the show since it all kicked off in 2011, shared his thoughts on how things will pan out for his character while dodging any major spoilers.

He said, “It ends beautifully for my character whether it be tragic or not.” Way too vague, Dinklage. My brain’s honestly working overtime right now: what does he mean by “tragic or not”?

Is Dinklage the kind of person who’d see the beauty in a kickass death or prefer a very non-Game of Thrones happy ending? At this point, all bets are off and I’m not going to hold my breath. As I’ve sadly learned over the years, all my favourite Thrones characters always die and nobody is safe in Westeros. (Side note: Robb Stark, I still miss you.)

As for the ending of the entire show? Dinklage said, “There are no better writers in television than [showrunners] Dan Weiss and David Benioff. They ended it brilliantly. Better than I could have imagined and you people are in for it.”

I've reached out to his agent for further clarification, but knowing how on it HBO is about Game of Thrones spoilers — I’d be surprised if they said anything at all. He’s not the only GoT castmember one to share that sentiment, as many of his co-stars have gushed over how well the show ends, even if some think it could be a controversial one.

My personal favourite to sit on the Iron Throne, Jon Snow (aka Kit Harington) also weighed in, telling MTV News, “I think a TV series that’s spanned eight, nine years is an incredibly difficult thing to end. I think not everyone’s going to be happy, you know, and you can’t please everyone."

As long as Cersei or the White Walkers don’t end up winning, I’ll be happy with whatever outcome TBH. That said, a bleak finale that shows just how futile the world of politics and power is sounds very on brand — it wouldn’t shock me if Thrones just killed off everyone at this point.

Game of Thrones season 8 is confirmed to drop early 2019, however the exact release date hasn’t been ironed out just yet. In the meantime, you can catch Peter Dinklage in My Dinner with Herve if you happen to have HBO Go or HBO Now — Sky usually cuts a deal with HBO so fingers crossed they bring the film to the UK soon.